Today is the day for Mt. Rushmore!

We began the day with a temperature of 34 degrees at the campground.  However, the day warmed up nicely…

We set off to see Mt. Rushmore – the Presidential Memorial.  We got more than we bargained for!

We drove towards Mt. Rushmore via the Needles Highway.  We saw (and drove through) spectacular rock formations: 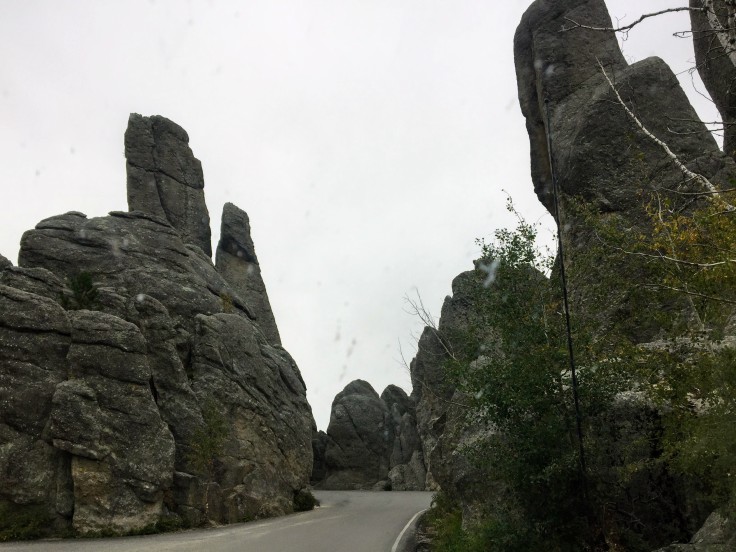 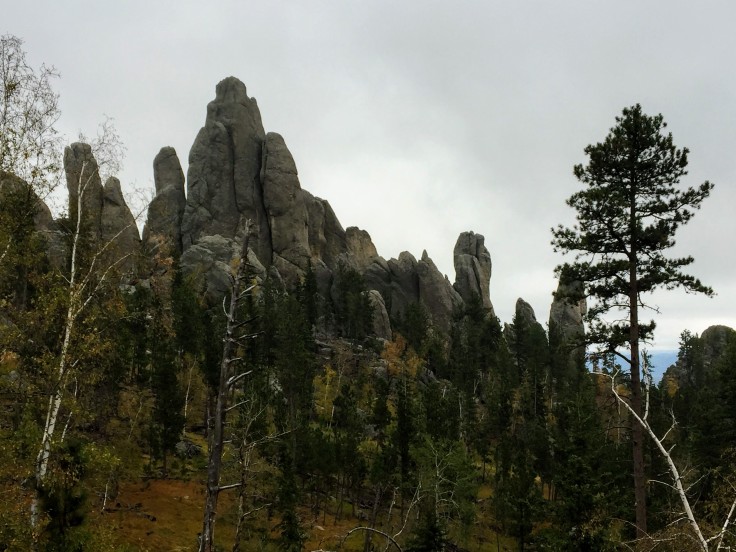 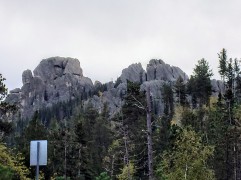 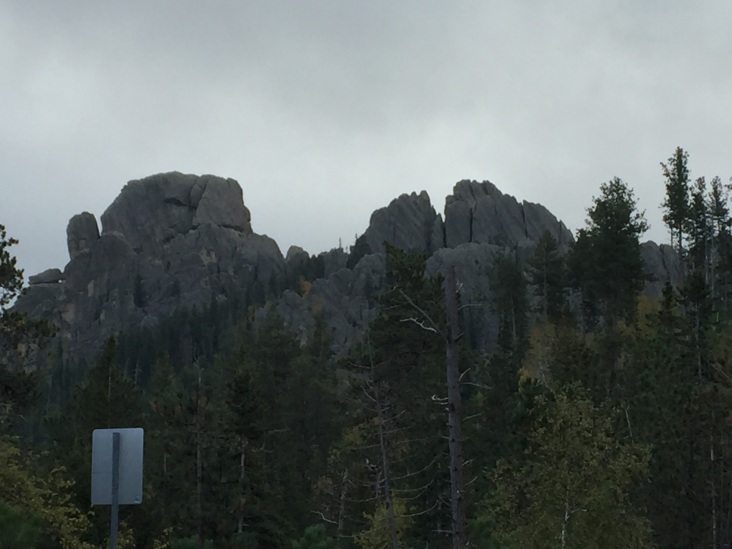 And when I say “drove through”, I mean through tunnels: 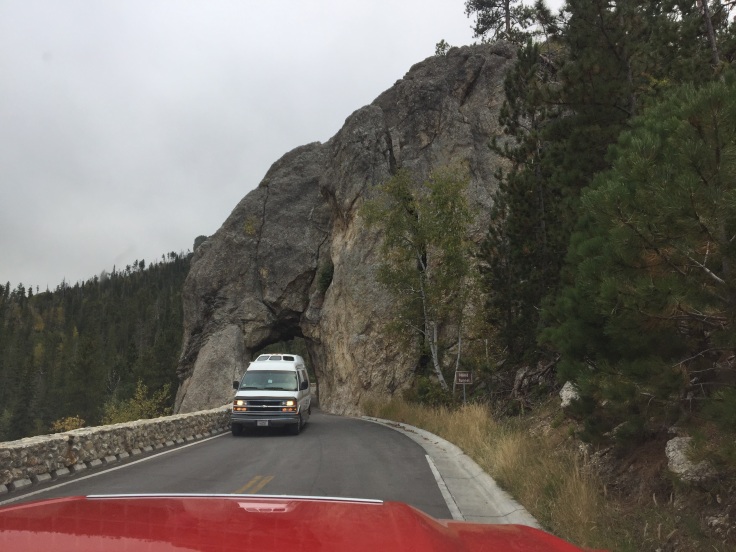 Tiny tunnels!  No Villas allowed on these roads!

There were a few viewpoints along the way that offered distant views of the monument: 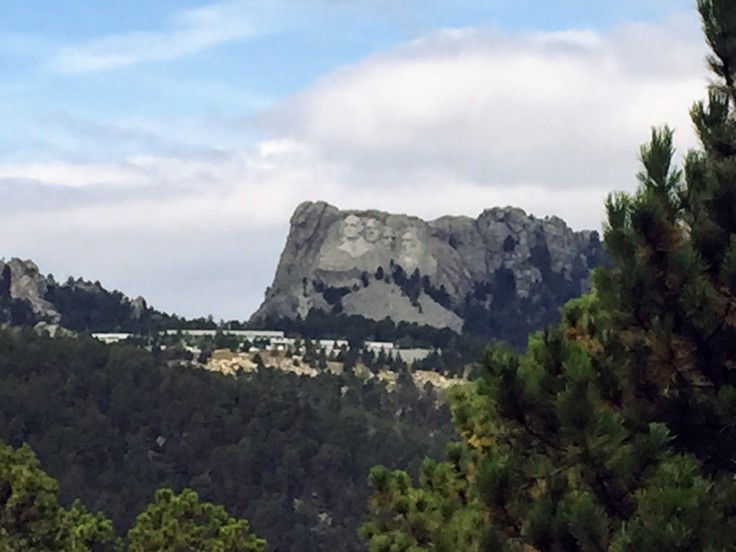 Mount Rushmore National Memorial is a sculpture carved into the granite face of Mount Rushmore, a batholith in the Black Hills in Keystone, South Dakota. Sculptor Gutzon Borglum created the sculpture’s design and oversaw the project’s execution from 1927 to 1941 with the help of his son, Lincoln Borglum, and Chief Carver Luigi del Bianco. Mount Rushmore features 60-foot tall sculptures of the heads of four United States presidents: George Washington (1732–1799), Thomas Jefferson (1743–1826), Theodore Roosevelt (1858–1919), and Abraham Lincoln (1809–1865).  The memorial park covers over 1,278 acres and is 5,725 feet above sea level.

South Dakota historian Doane Robinson is credited with conceiving the idea of carving the likenesses of famous people into the Black Hills region of South Dakota in order to promote tourism in the region.  Robinson’s initial idea was to sculpt the Needles; however, Gutzon Borglum rejected the Needles because of the poor quality of the granite and strong opposition from Native American groups.  They settled on Mount Rushmore, which also has the advantage of facing southeast for maximum sun exposure.  Borglum decided the sculpture should have broad appeal and chose the four presidents because of their roles in preserving the Republic and expanding its territory.

Construction on the memorial began in 1927, and the presidents’ faces were completed between 1934 and 1939. Upon Gutzon Borglum’s death in March 1941, his son Lincoln Borglum took over as leader of the construction project.  Each president was originally to be depicted from head to waist.  Lack of funding forced construction to end in late October 1941.

Mount Rushmore has become an iconic symbol of the United States, and it has appeared in works of fiction, as well as being discussed or depicted in other popular works.  It attracts over two million visitors annually.  (I think they were all here today… see below…)

After Needles we found the Ironwood Highway.  It is famous for the Pigtail Bridges – wooden (logs) bridges that spiral the road upwards to meet a tunnel, then offer spectacular views after you drive through the tunnels: 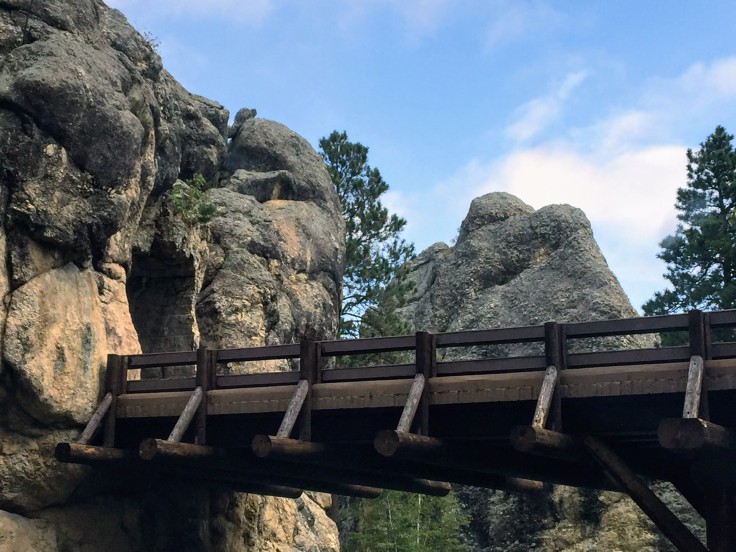 And then the payoff at the end of the tunnel:

It is quite the dramatic scene!

We drove on to the memorial itself.  Then we waited for over an hour, in a mile long traffic jamb of cars trying to get into the parking structure.  (PS to the National Park Service:  You need to get this figured out!  I would hate to be here in the summer when the park is busy!)

We opted not to park; we did have some fine views of the monument: 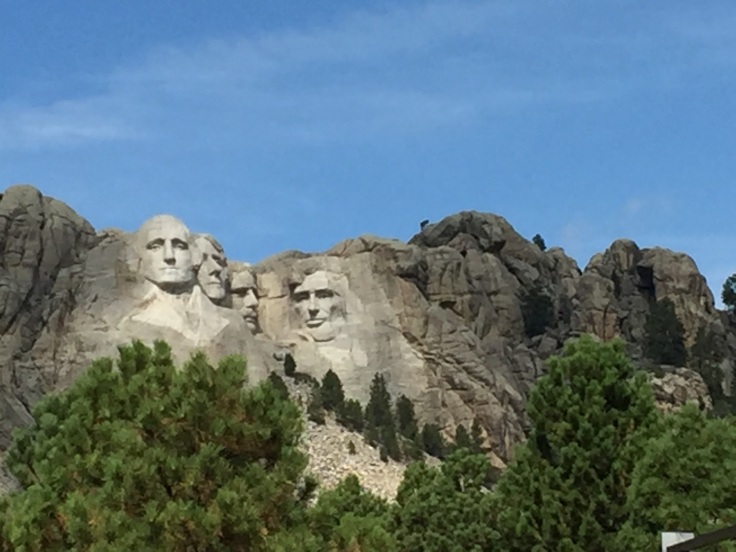 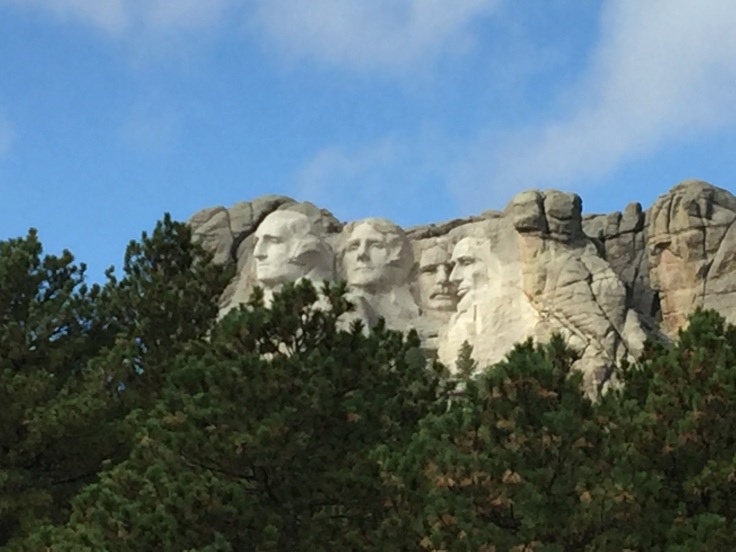 When we finally were able to drive around the traffic jam we saw something that I had not known about:  Washington’s profile:

This was not intentional on the part of the sculptor; he originally had Jefferson placed here, but after they had done some preliminary rough blasting, they found that the rock was not suitable; they blasted off the preliminary work, and this remained. 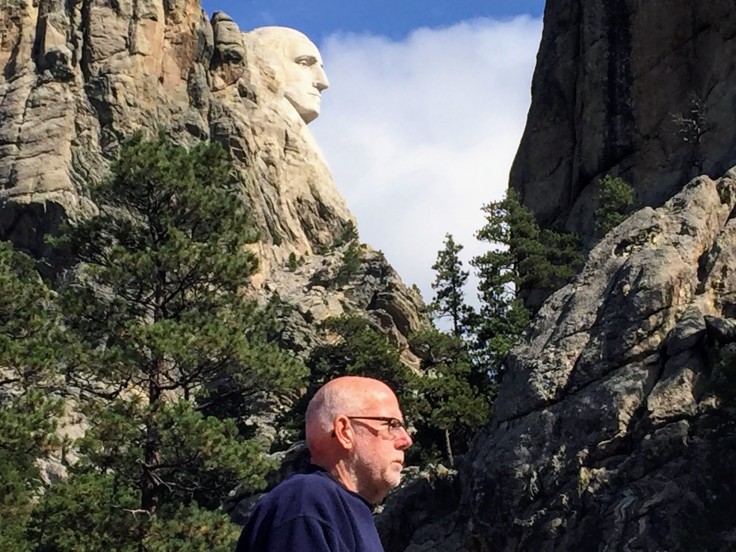 Also, if you look closely, you can see some people climbing on the monument***:

After seeing the monument we took a break and met my cousin and his wife (Chuck and Joan Canaan) for lunch; they live here in Rapid City, SD: 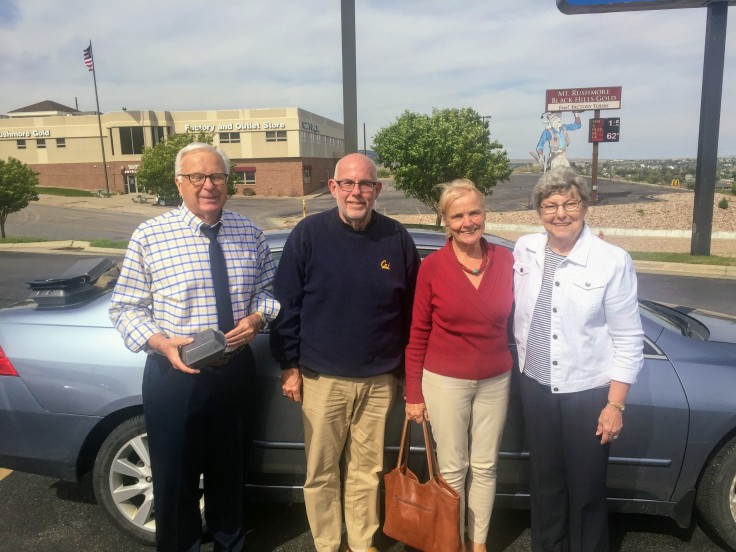 Then, back to the Black Hills we went.  This time to see its counterpoint, the Crazy Horse Memorial:

The Crazy Horse Memorial is a mountain monument under construction on privately held land in the Black Hills, in South Dakota. It will depict the Oglala Lakota warrior, Crazy Horse, riding a horse and pointing into the distance.

The memorial was commissioned by Henry Standing Bear, a Lakota elder, to be sculpted by Korczak Ziolkowski.  It is operated by the Crazy Horse Memorial Foundation, a nonprofit organization.

The memorial master plan includes the mountain carving monument, an Indian Museum of North America, and a Native American Cultural Center.  The monument is being carved out of Thunderhead Mountain, on land considered sacred by some Oglala Lakota, between Custer and Hill City, roughly 17 miles from Mount Rushmore.  The sculpture’s final dimensions are planned to be 641 feet wide and 563 feet high.  The head of Crazy Horse will be 87 feet high; by comparison, the heads of the four U.S. Presidents at Mount Rushmore are each 60 feet high.

The monument has been in progress since 1948 and is far from completion.  In fact, it appears that nothing has been done in years.  If it is ever completed, it may become the world’s largest sculpture.  I say, If…

At the base of the mountain is a huge complex containing western native american art, memorabilia, and trinkets, basically a giant gift shop.  The sculptor died in 1982, and his wife died in 2014.  Their 10 children have taken over the foundation.

Friends had told us this is a not-to-be-missed opportunity.  We thought the whole thing was a giant waste of time.  It appears to me that if they had spent half as much effort on completing the memorial as they did on building a giant gift shop for selling trinkets, they would have made more progress.  At this point it appears that it will never be finished…

So, after our disappointment at the Crazy Horse Memorial, we headed into Custer State Park, and drove the Wildlife Loop.  We saw beautiful outcroppings and wildlife… 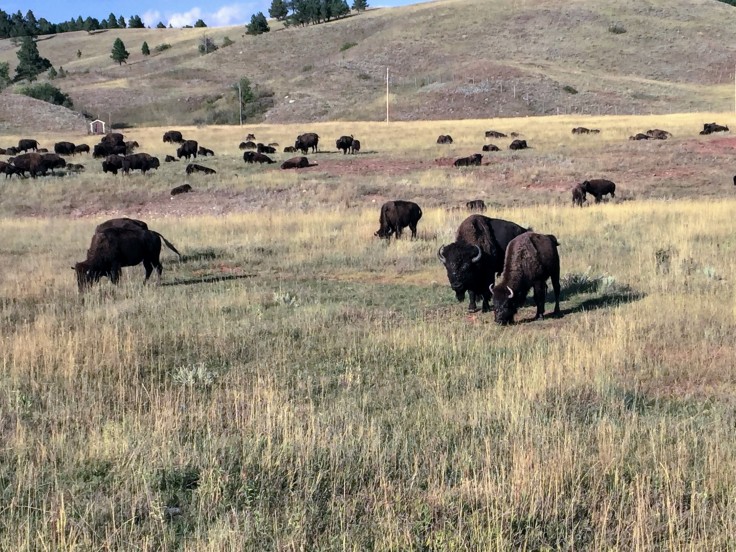 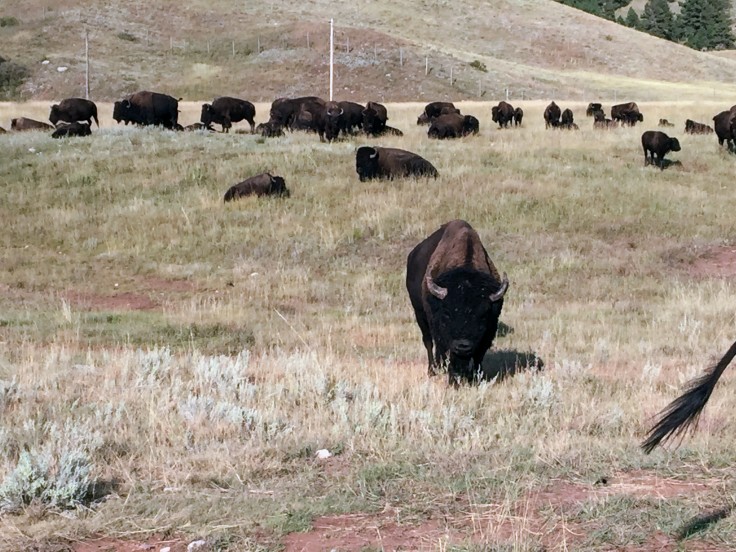 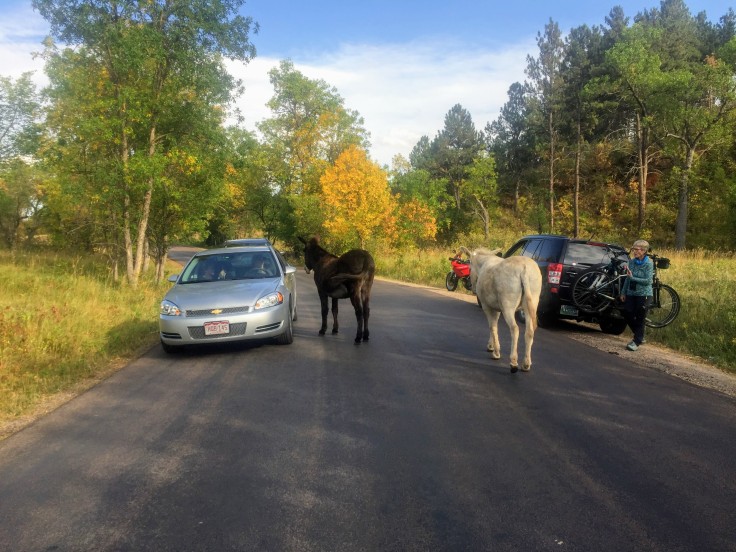 They were very friendly: 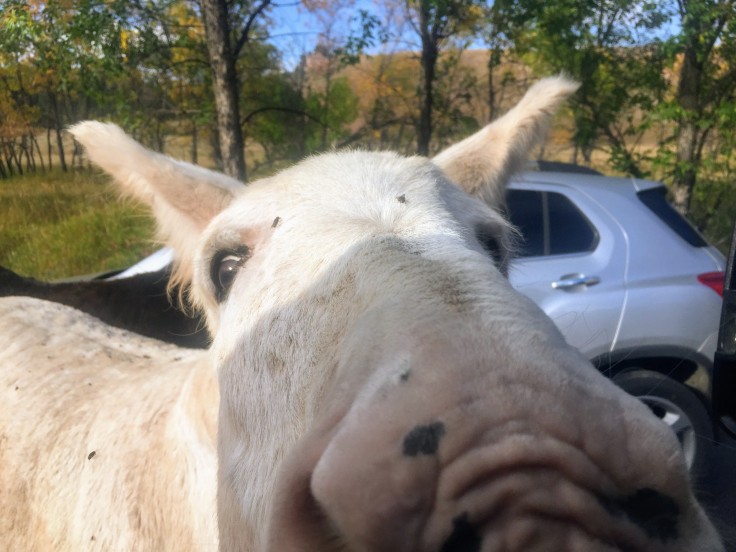 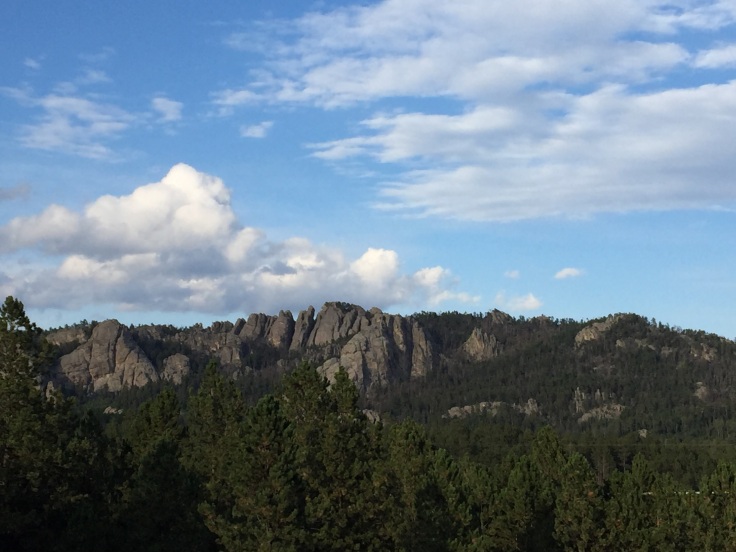 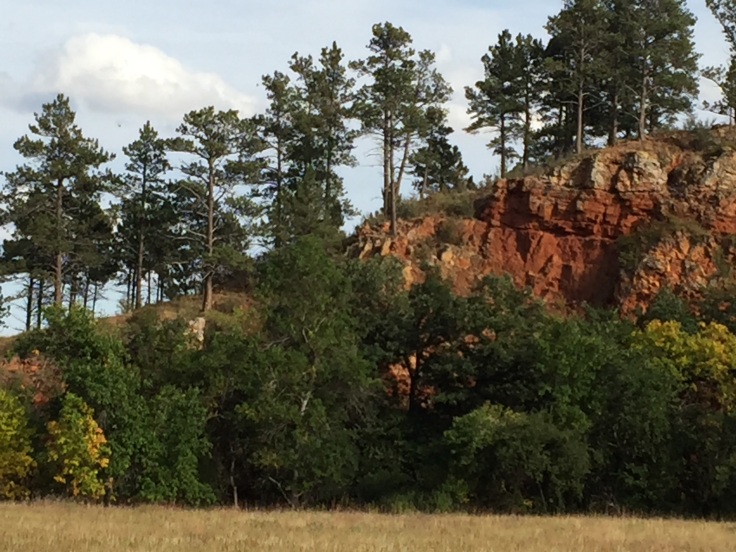 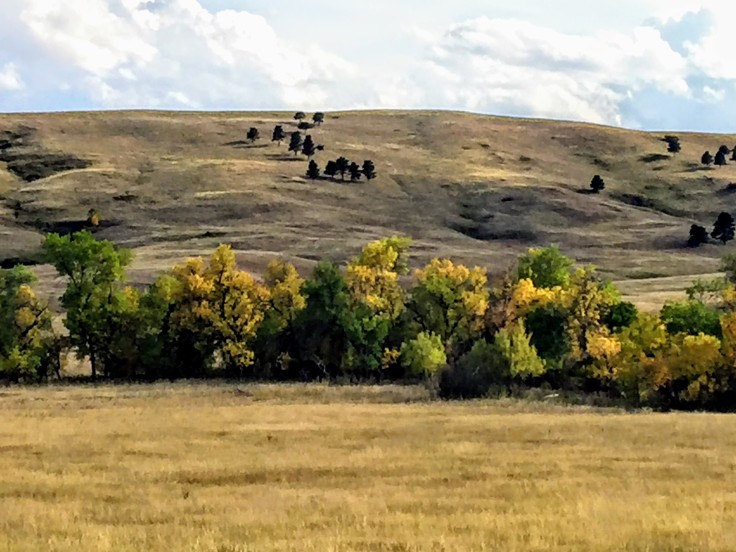 We finally returned to the Villa, exhausted.  Happy hours ensued and an enjoyable time was had by all…

*** The monument was famously used as the location of the climactic chase scene in Alfred Hitchcock‘s 1959 movie North by Northwest.