We left Maple Valley and pointed the Villa south.  Sunday morning traffic was light, and in a few hours we arrived at Vancouver, Washington.  We parked the Villa in a pre-school parking lot and walked for about 1/2 hour. Then we found the Kitchen Table Cafe, where we joined friends from high school: 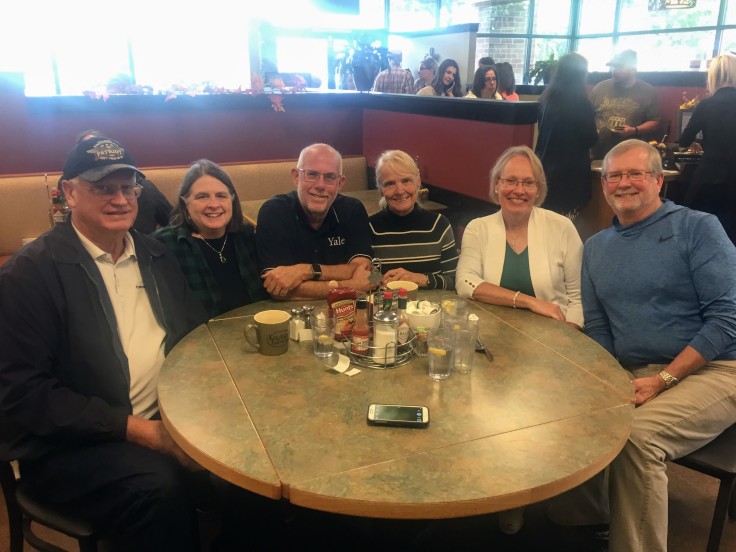 We had a lovely time getting reacquainted, and we had a good breakfast as well; but soon we were once again on the road.  Within a few minutes we crossed over the Columbia River into Oregon: 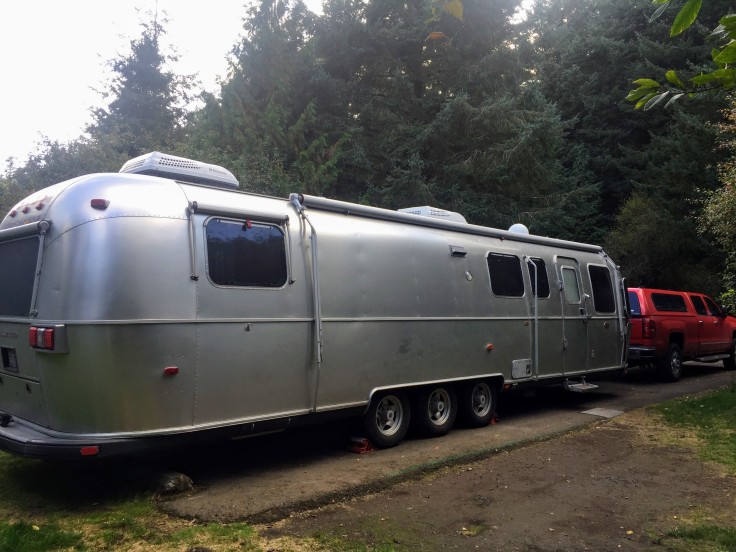 We found our assigned camp site and set up.  Then we headed out to see the falls.

Silver Falls State Park is located near Silverton, OR, about 20 miles east-southeast of Salem.  It is the largest state park in Oregon with an area of more than 9,000 acres, and it includes more than 24 miles of walking trails, 14 miles of horse trails, and a 4-mile bike path.  Its 8.7-mile Canyon Trail/Trail of Ten Falls runs along the banks of Silver Creek and by ten waterfalls (duh!).  Four of the ten falls have an amphitheater-like surrounding that allows the trail to pass behind the flow of the falls.

The most accessible waterfall is South Falls; we reached it after about a 1/2 hour walk through the park; no hiking involved.  We even walked across this covered pedestrian bridge over Silver Creek: 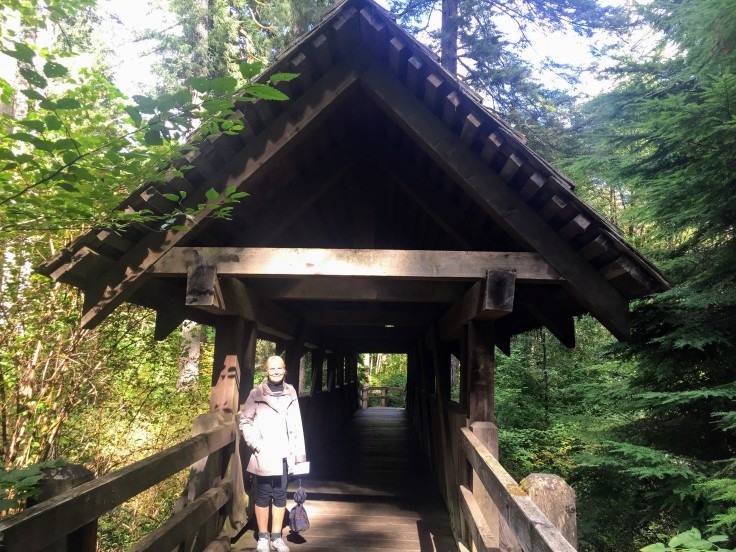 Interestingly, we arrived at the top of the falls, where Silver Creek flows over the basalt rock into the canyon below:

From here, we walked around the canyon and down a path into this bowl-shaped arena:

The falls eventually came into view: 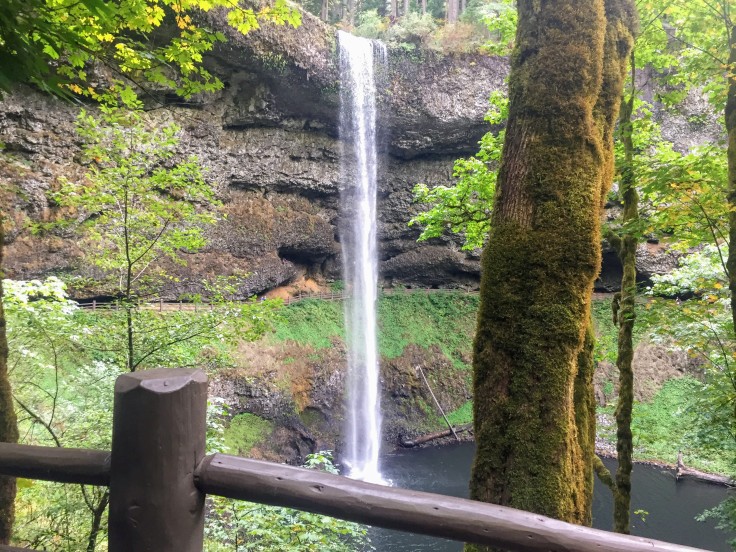 The gigantic overhang of the rock above the pond below is amazing! 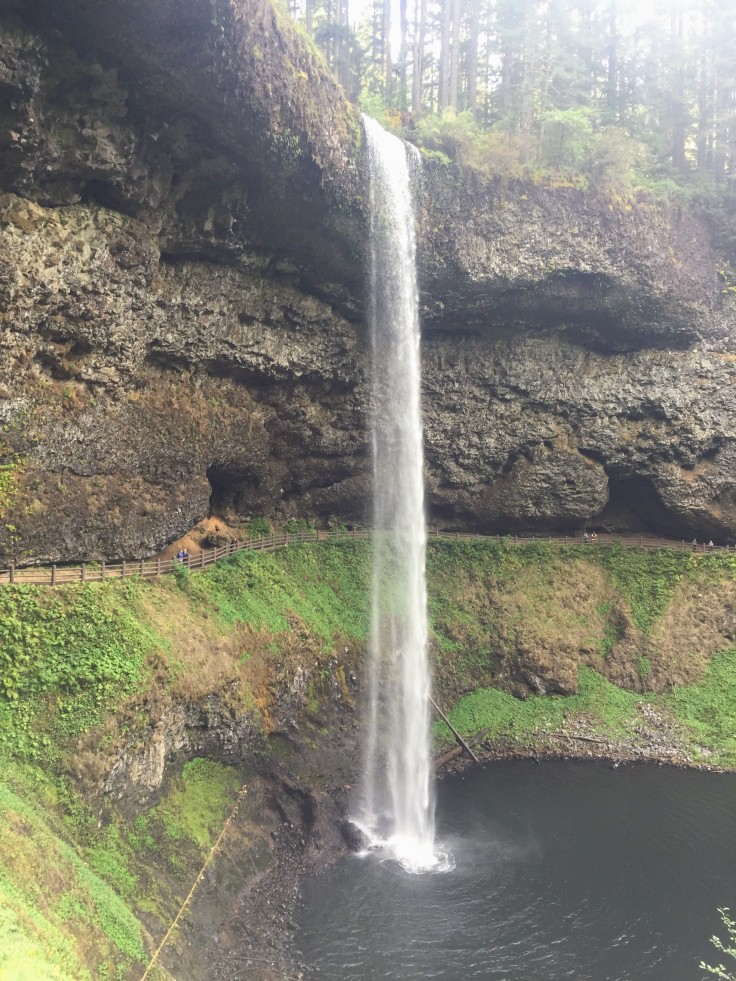 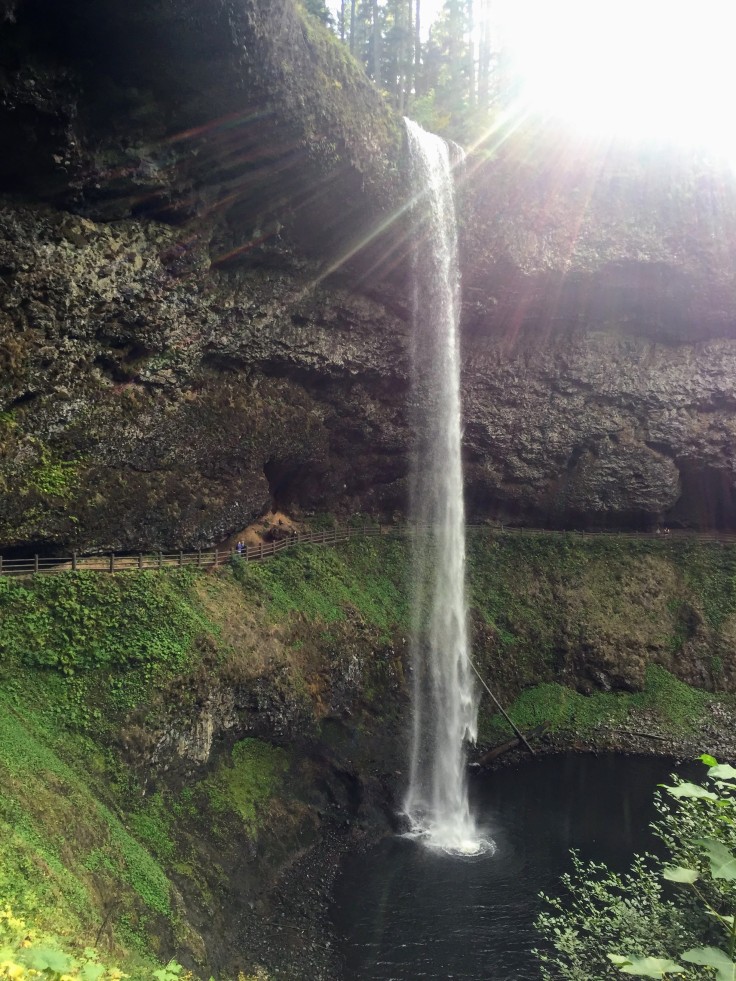 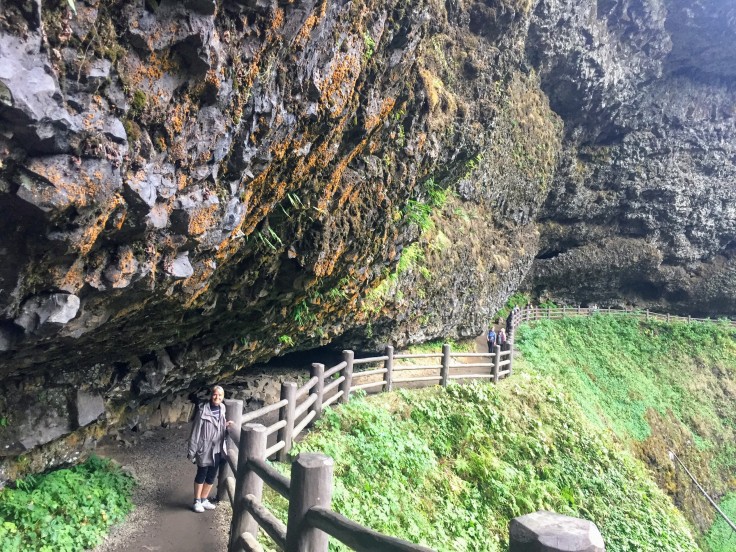 Soon we were behind the falls, where we could see the back side of water: 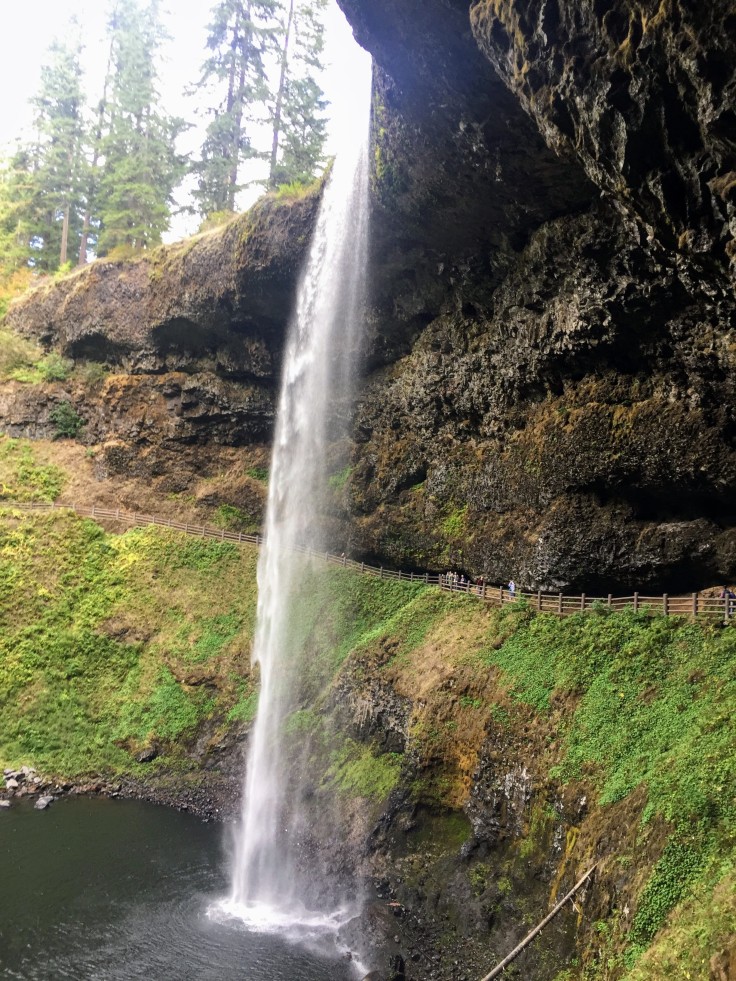 We decided to proceed to the lower South Falls, another .8 mile down the hill.  We walked along the creek and walked lower and lower into the canyon:

Then it got steep, and we descended many stairs, until the Lower South Falls came into view: 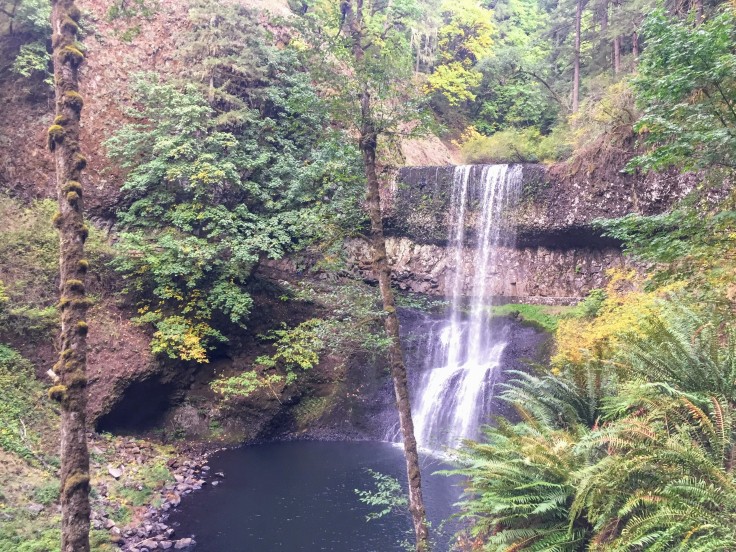 Once again, we could walk behind the falls:

Finally we reached the main area of the park.  There is a lovely Lodge, built between 1946 and 1955; it used to be a full service restaurant; now it is a simple cafe: 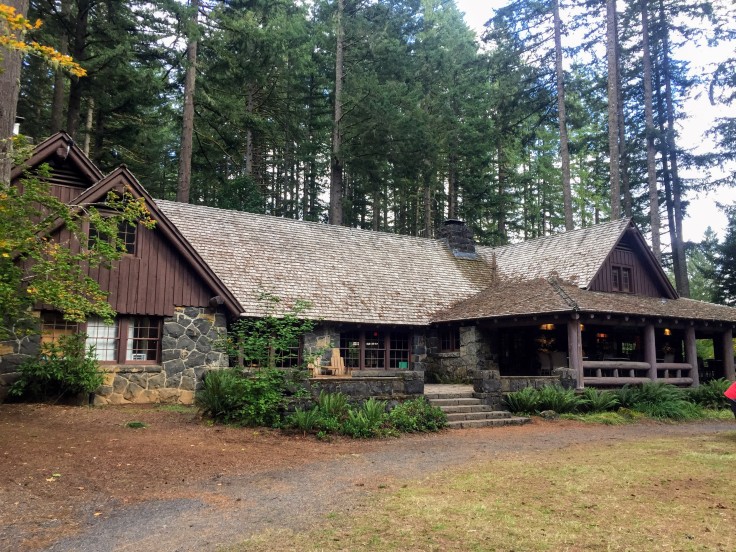 After our taxing hike we walked the 1 mile back to the Villa.  Happy Hours ensued and an enjoyable time was had by all…

We are in Maple Valley, WA, at the home of Lynda’s sister and her husband, Barb and Terry DeKruyf: 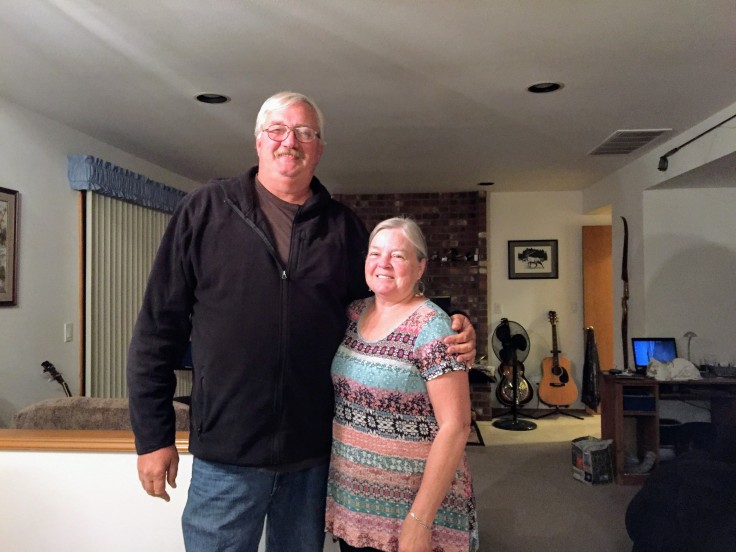 The Villa is parked in their front yard: 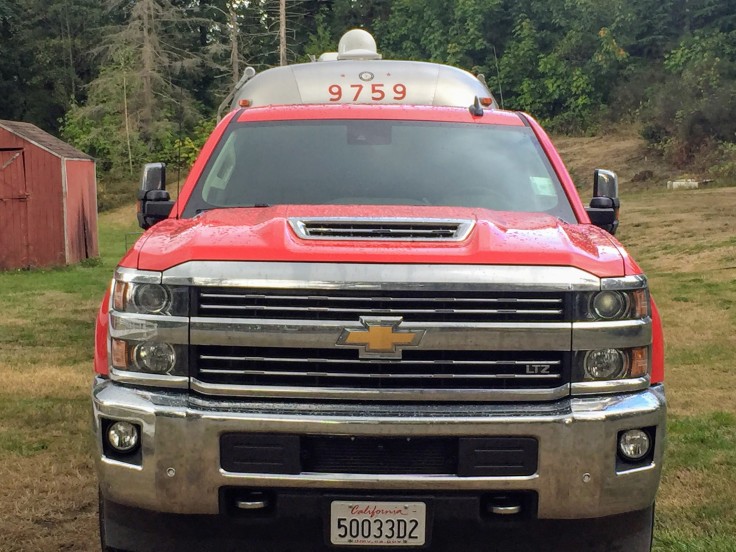 Terry was working this weekend; Lynda, Barb, and Maria visited and played Scrabble; I watched football:

Mid-day I went for a walk to meet some of the neighbors: 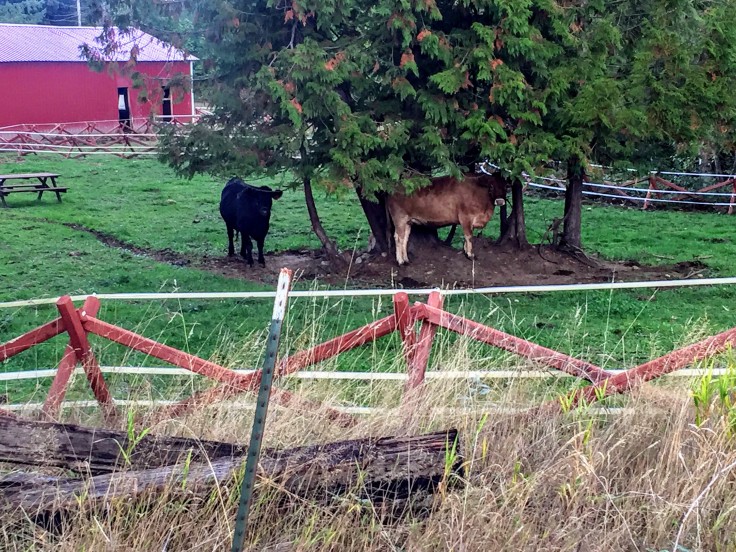 Later in the afternoon we drove about 30 minutes southwest to the home of Barb’s son, Andy, and his wife, Danae.  Andy cooked a great dinner of salmon and Kobe beef.  Maria read to Andy’s daughter, Riley:

It was a nice day of relaxing and visiting family.  An enjoyable time was had by all…

We hitched up and left Port Townsend at about 8:30 am; we are heading west to see the Olympic National Forest, along the northern coast of the Olympic Peninsula.

The Olympic National Forest is home to four temperate rain forests; they are part of a huge and historic Pacific Northwest rain forest that once stretched from Oregon’s southern coast to southeastern Alaska.  They are the Hoh, Quinault, Queets and Bogchiel rain forests.  We were in the coastal plains of the Hoh rain forest.

But what makes a temperate forest?  Rain.  Rain.  And more rain ⎯ 12-14 feet per year, to be exact.  Climate is also an important factor.  Temperatures rarely drop below freezing or go above 80F, enabling an incredibly unique ecosystem to grow.  Mosses, ferns, Douglas fir, red alders, Western hemlocks, and Sitka spruce thrive in these temperate rain forests, as do epiphytes, which are plants growing on other plants.  Cat-tail moss and licorice ferns are two types of epiphytes you will find in the Olympic National Forest.

Another characteristic of temperate rain forests are nurse logs, which are the remnants of downed trees.  They become vibrant places for seeds to grow, small mammals to live and insects to burrow.

So we drove through the rain, amongst trees and plains; we drove along Lake Crescent: 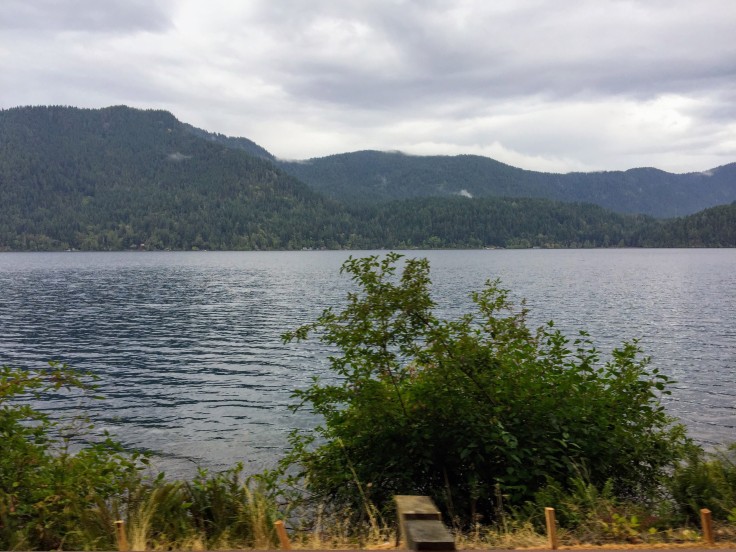 We finally arrived at the Storm King Ranger Station, the trail head for the hike to Marymere Falls.  Or, I should say, we almost reached it.  About 1 1/2 miles before the turn-off we were stopped for construction.  We sat for over 1/2 hour, waiting.  Finally we were allowed to proceed.  Then we saw it: a huge rock wall, extending hundreds of feet up the mountain; about half way up were three or four men dangling from harnesses, working on the rock face.  Apparently they have discovered several fissures that are threatening to break loose; the workmen are blasting away the loose rock to prevent it from falling onto the highway and into the lake below.

So we parked near the ranger station and the shores of Crescent Lake: 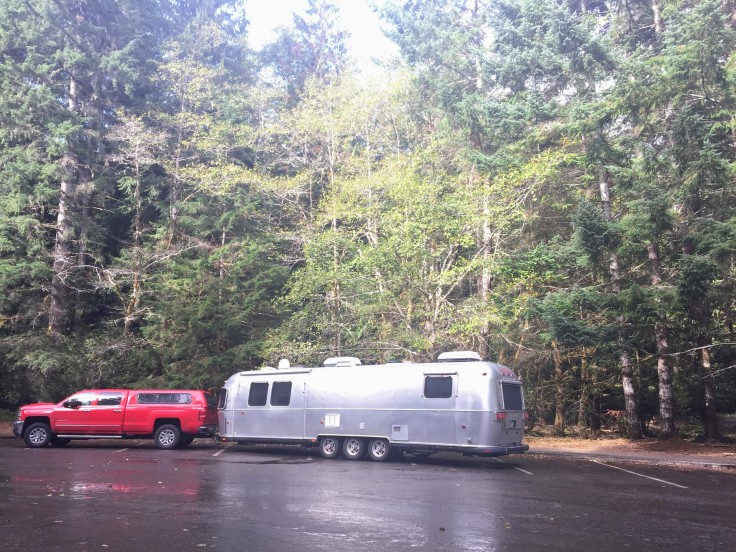 The trail led under the highway, and up through the rain forest:

PS:  Lynda always says she takes pictures of me so that she will have pictures to show at my funeral.  I told her that the photo above is the one I want printed, enlarged to 11 x 17, and framed, to be placed on my casket…

The rain forest is really amazing, with the moss, the colors, and the nurse logs: 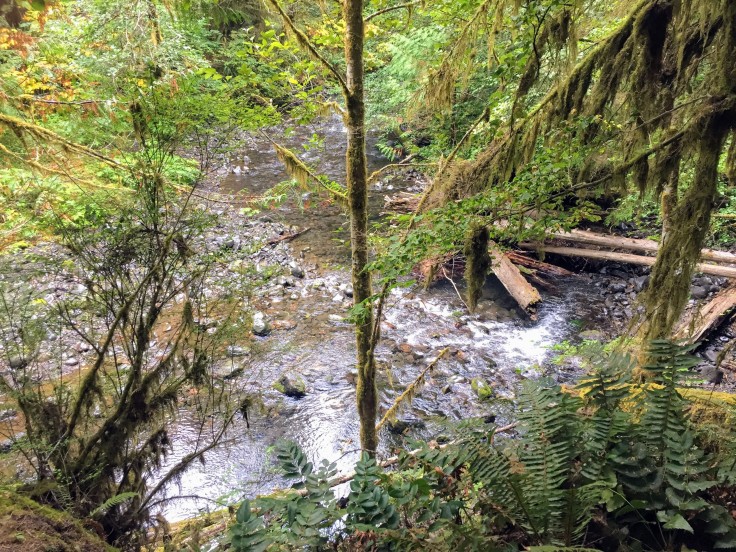 We saw the river and crossed over some bridges; one bridge was even made from a fallen log: 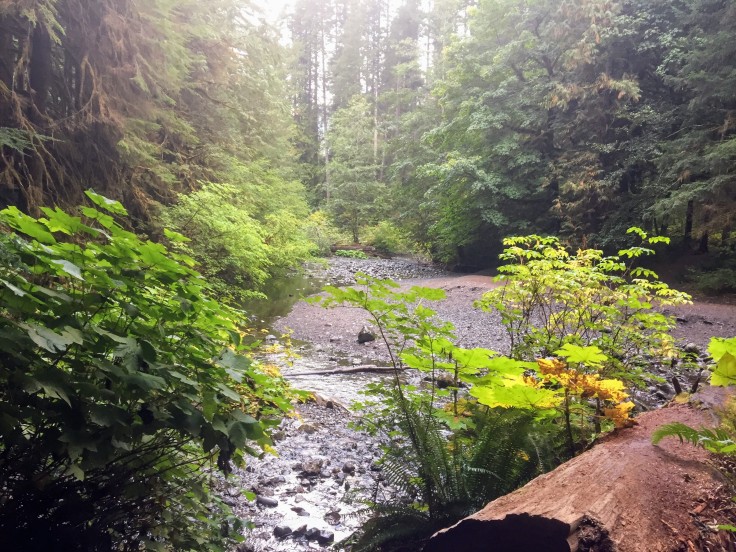 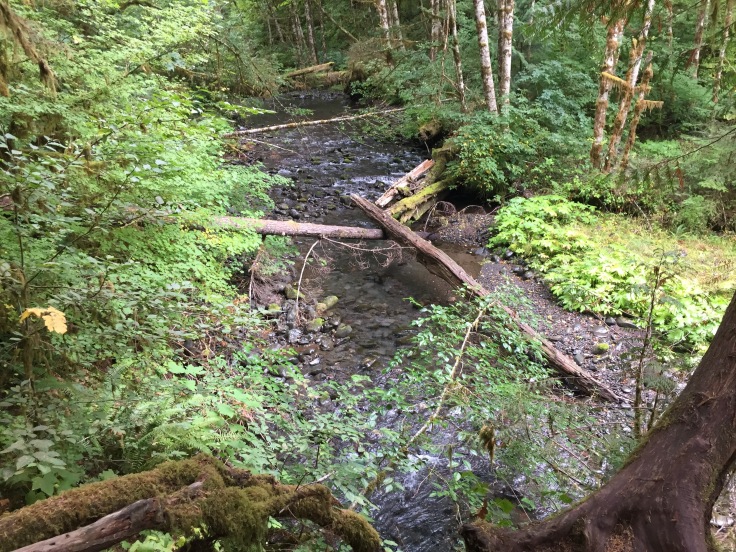 We finally reached the falls; they are about 90 feet tall: 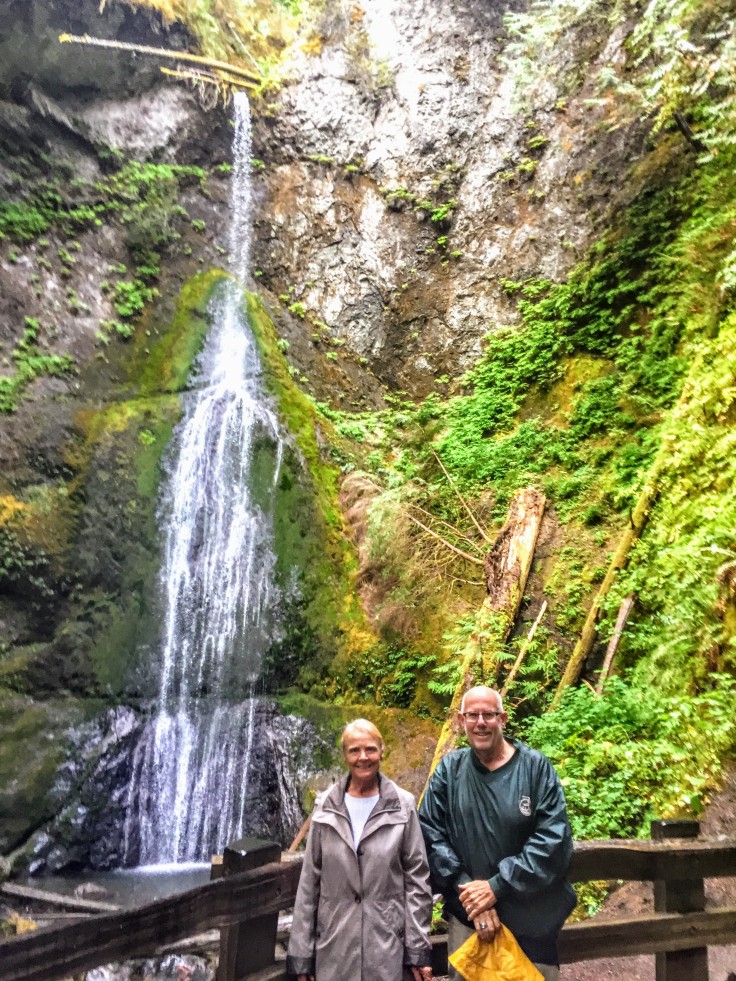 It was a nice hike; it was an easy-to-follow trail.  It started sloping moderately, but near the falls it became very steep; many parts of the trail were steps.  It was just about two miles, round trip, to where we had parked the Villa.

So, after having our exercise for the day, we drove back east. We again had to wait at the construction site, but it must have been lunch time, because the wait was only about five minutes.  And, speaking of lunch, we stopped in at Granny’s Cafe: 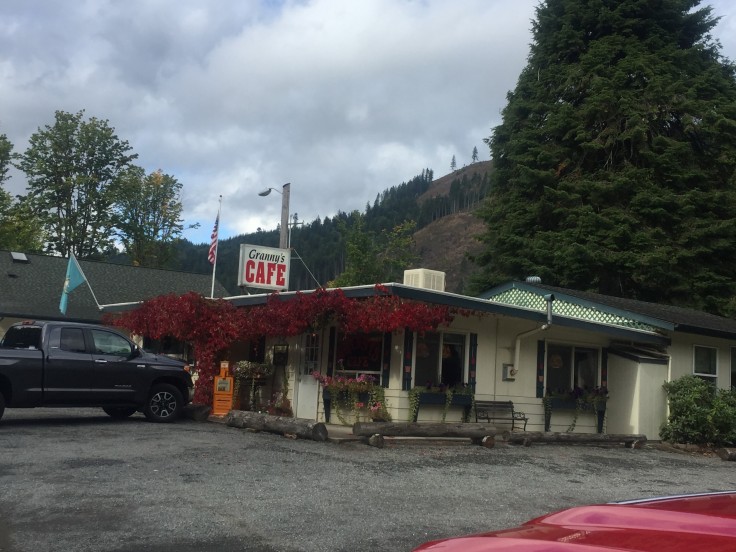 Apparently the current owner bought the cafe from her mother, the original Granny… We had a lovely lunch:

We even had a view of the Villa:

Now our destination is Maple Valley, to visit both of  Lynda’s sisters.  We chose to take the scenic route, along the west shore of the Hood Canal:

Hood Canal is a fjord forming the western lobe, and one of the four main basins, of Puget Sound.  Hood Canal is not a canal in the sense of being a man-made waterway—it is a natural waterway.  It is simply long and narrow, with an average width of 1.5 miles and a mean depth of  about 175 ft.  It has about 215 miles of shoreline, most of it dotted with vacation houses.  Along its entire length, Hood Canal separates the Kitsap Peninsula from the Olympic Peninsula. 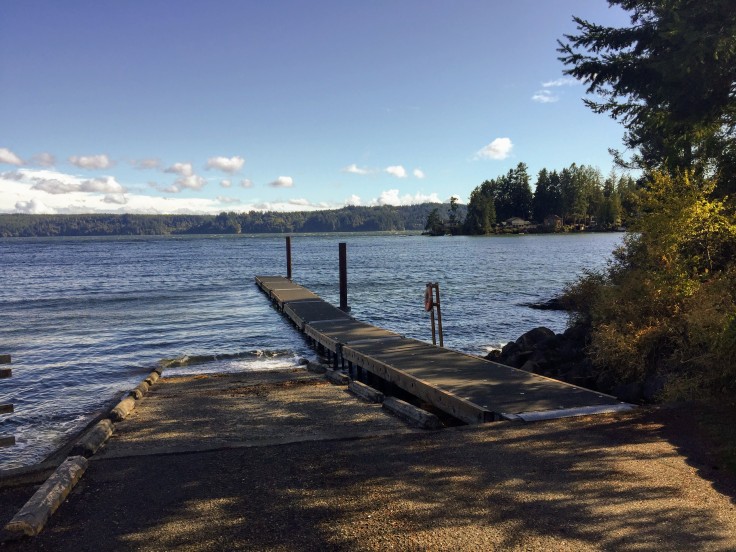 After fighting Friday afternoon rush hour traffic on the 5 we arrived in Maple Valley.  Happy hours with Lynda’s sisters ensued as the moon rose over the Villa: