We relaxed a bit this morning… We ate breakfast in the hotel restaurant, the Break of Day.  We readied ourselves for a day of the ridiculous and the sublime: we will see House on the Rock and Taliesin.  The House on the Rock is an absurd tourist attraction; Taliesin is the home and studio and school of Frank Lloyd Wright.

The House on the Rock’s “Infinity Room”, as seen from the road:

The House on the Rock was the first on our schedule.  It was started in 1945 as a house built atop a 70′ x 200′ rock that was 60′ tall, set in the Wisconsin countryside.  The house was the idea of one man, Alex Jordan, who clearly had a mind of his own.  The house contains many extremely awkward spaces, with bad lighting, too low ceilings, and uneven floors and steps.  It is not so much a house as it is a series of spaces left over after he built stone walls, windows, and doors.  Later, Jordan added a Gate House and a Mill House.  Then he added a giant cantilevered “Infinity Room” for no apparent reason.  The Infinity Room spans about 60′ to the adjacent rock, then cantilevers another 140′, all about 250 feet above the forest floor below…   After that things got weird.  Today there is a HUGE metal box of a warehouse that contains acres and acres of crap, plus a few interesting antiques and music machines.  It is an absurd collection of collections that serve no purpose whatsoever.  Spending three hours here was a giant waste of time. 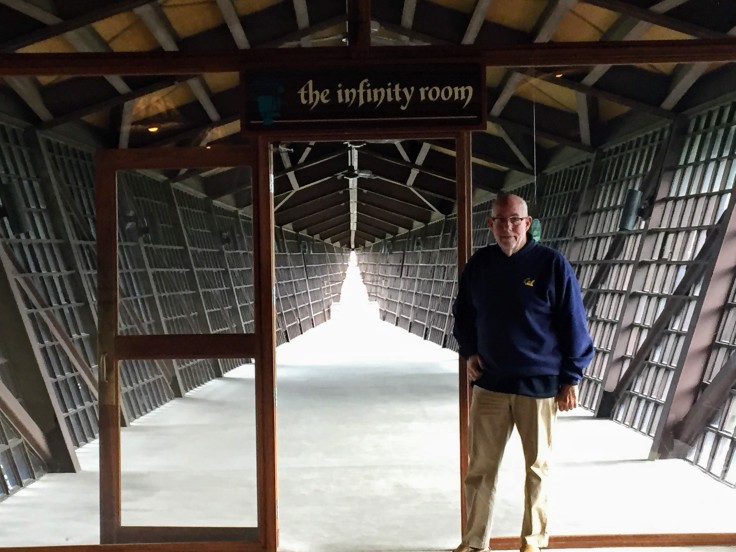 The “Glass Coffee table” at the end of the Infinity Room: 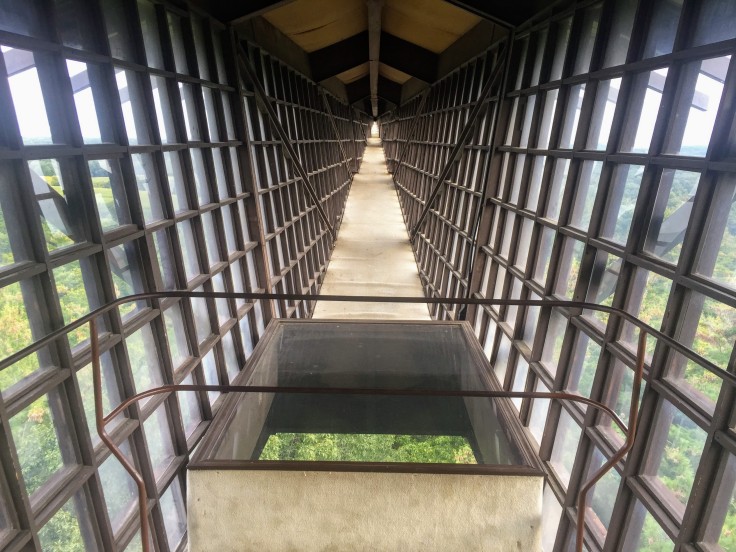 The Infinity Room creaks and groans when two – three people walk out there; I would not want to be there with 200 people…

There were a few things that were of moderate interest… 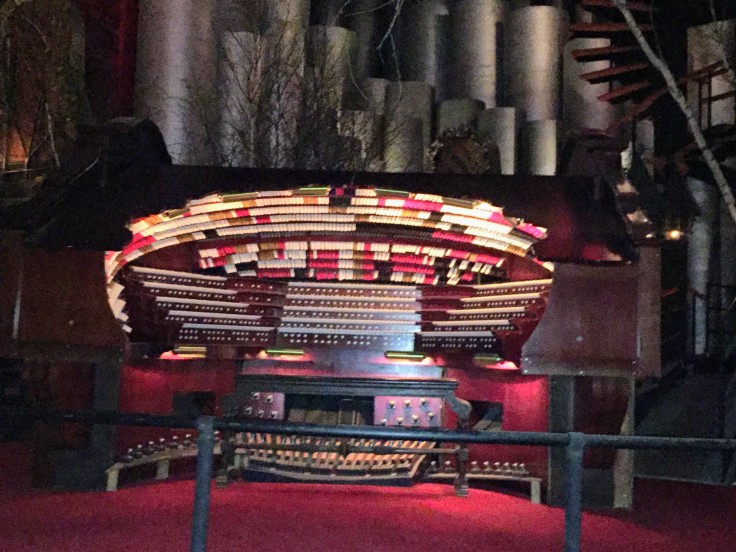 There are several (many?) music machines, some large, like this one, and some smaller. These are mechanical devises that play musical instruments much like a player piano. This one is a complete orchestra.  It is amazing to watch and listen to, but I have to ask, “Why?”

There was even a Rockefeller moment:  In one of the maritime displays there is a note about this whaling ship, the Charles W. Morgan.  As you can see by reading the notes, the whaling industry was put out of business by John D. Rockefeller and the petroleum industry…

By the time we left the House on the Rock my eyes hurt.  The green countryside of Wisconsin was very soothing.  We found the Wyoming Valley Cultural Center, designed by Frank Lloyd Wright as a memorial to his mother:

We eventually found “downtown” Spring Green and we found a lovely bookstore with its own cafe.  After lunch we walked through the town; note that I am standing in the middle of the street at about 1:00 pm:

We walked around and found several buildings that had been designed by William Wesley Peters, a Taliesin associate and past student of FLW.  They were very interesting: 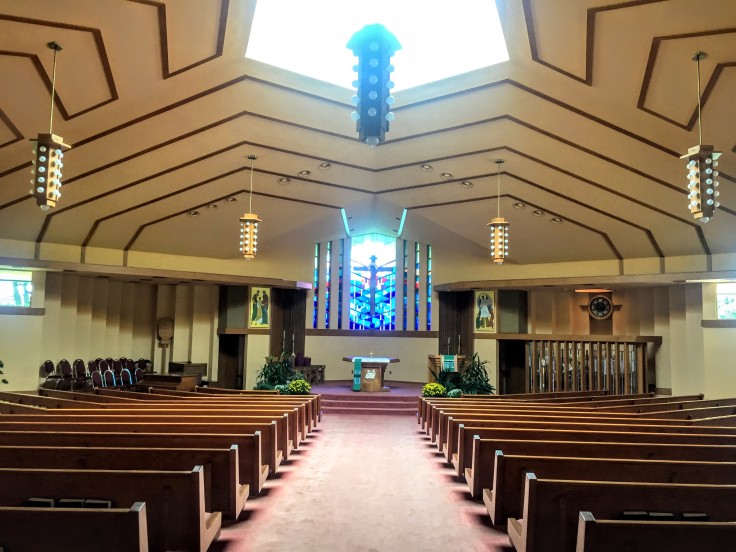 Originally a drive-through bank, this is now a private residence: 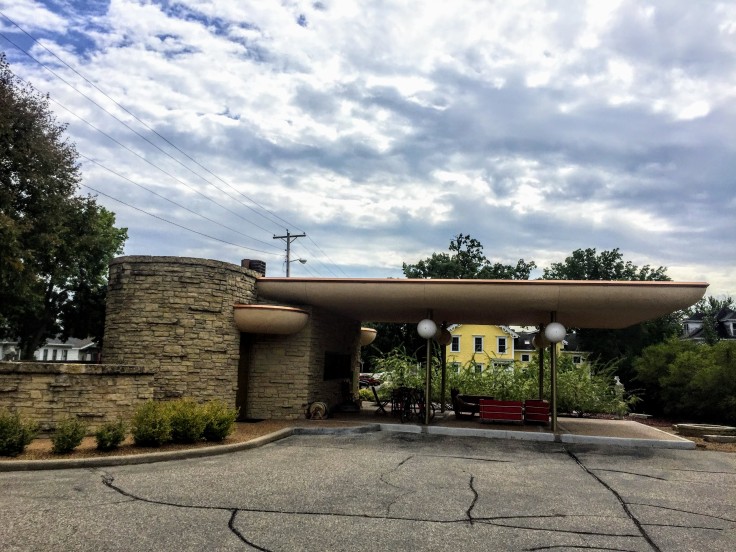 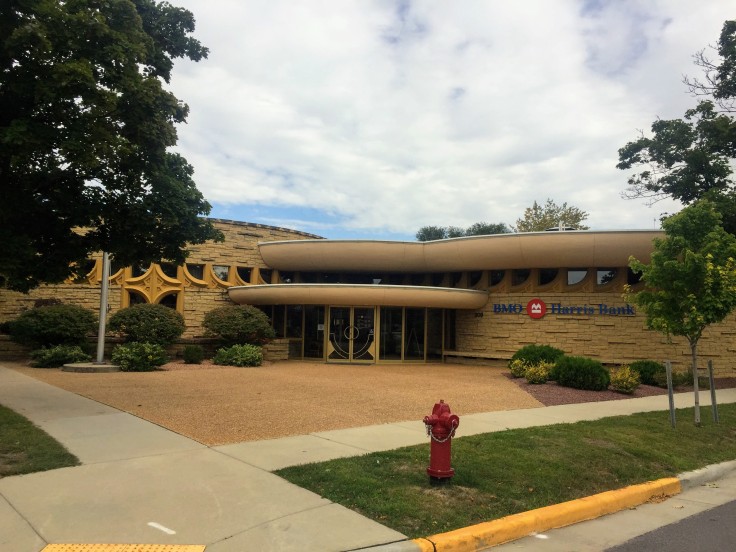 Originally a medical office, this is now a private residence:

After this fun walk it was time for the main event; we drove to the Taliesin Visitors Center:

This building was originally designed by FLW as a restaurant and conference center. Today it is the visitor’s center, but it still includes the restaurant, plus the offices of the Frank Lloyd Wright Foundation, which owns the building and Taliesin itself.

Taliesin has quite a storied past.  FLW’s maternal grandparents and many aunts and uncles farmed in this valley near Spring Green; FLW spent most of the summers of his youth here, working along side his cousins on the various farms.  So it was only natural that he kept returning to this area throughout his life.

FLW had a successful and thriving practice in Oak Park, IL, having built over 50 buildings there.  But in 1909 he abandoned his wife and six children and fled with his mistress to Germany.  When he returned two years later he found he was not welcomed back to Oak Park, so he retreated to the family property near Spring Green.  Here FLW designed and built Taliesin I.  The design of the original building was consistent with the design principles of the Prairie School, emulating the flatness of the plains and the natural limestone outcroppings of Wisconsin’s Driftless Area.  The structure included his home, an agricultural wing containing stables, chicken coops, and a pig shelter, plus his architectural studio.

In 1914, while FLW was away, a disgruntled employee set fire to the living quarters and murdered FLW’s mistress, her two children, and three others.  FLW rebuilt the residential wing  and remodeled the other areas.

Taliesin II was used only sparingly by FLW as he worked on projects abroad.  He returned to the house in 1922 following completion of the Imperial Hotel in Tokyo.  A fire caused by electrical problems destroyed the living quarters again in April, 1925. Taliesin III was constructed by Wright by late 1925.  During the late 1920s and the 1930s FLW turned the agricultural wing into studios, a large drafting room, and dormitories, as he began the Taliesin School of Architecture.

Taliesin III was FLW’s home for the rest of his life, although he began to winter at Taliesin West in Scottsdale, Arizona, upon its completion in 1937. Many of Wright’s acclaimed buildings were designed here, including Fallingwater, “Jacobs I”  the Johnson Wax Headquarters, and the Solomon R. Guggenheim Museum.  Wright was also an avid collector of Asian art and used Taliesin as a storehouse and private museum.

So it is Taliesin III that we tour today.  A shuttle bus takes us from the visitor’s center. We follow roughly the path taken by horse-drawn carriages when the house was first built. We walk through the meadow, past the orchard and the vineyards and arrive at the courtyard surrounded by the residence, the studio, and the former agricultural wing.

As seen from the highway below:

From the top of the hill, into which the house is nestled: 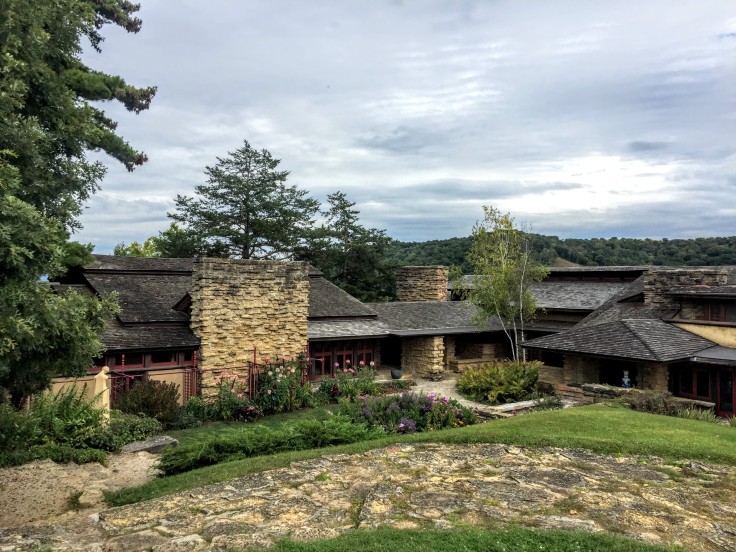 The prominent hip-roofed wing seen above was originally the porte cochere in the days of horses and carriages… In Taliesin III the entry was moved to the opposite side of the house to accommodate automobiles, and the porte cochere was enclosed: 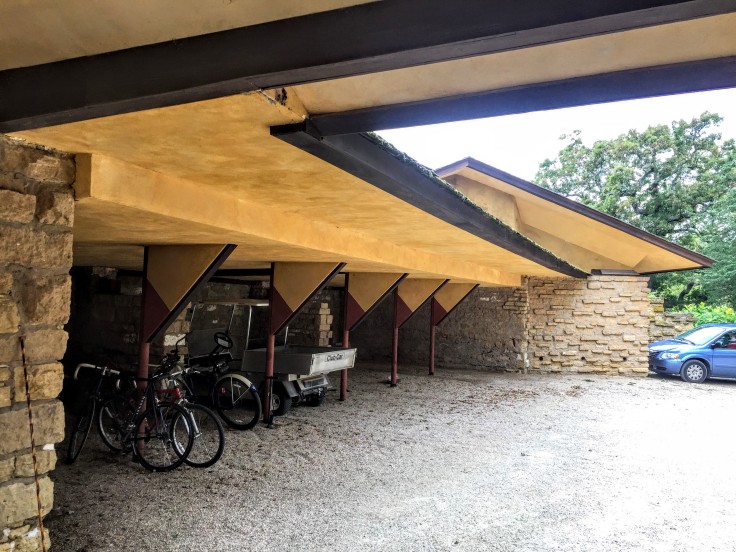 Courtyard and path to the agricultural wings, now used by the school:

Part of the agricultural wing: 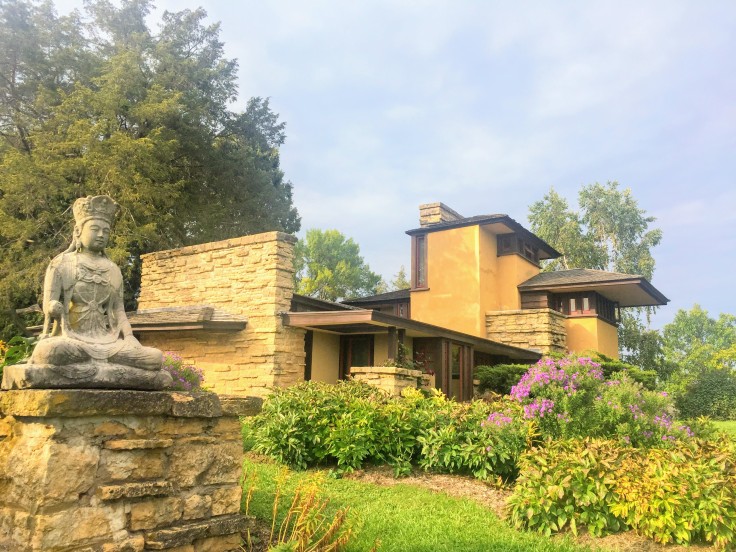 Conference Room in the Studio: 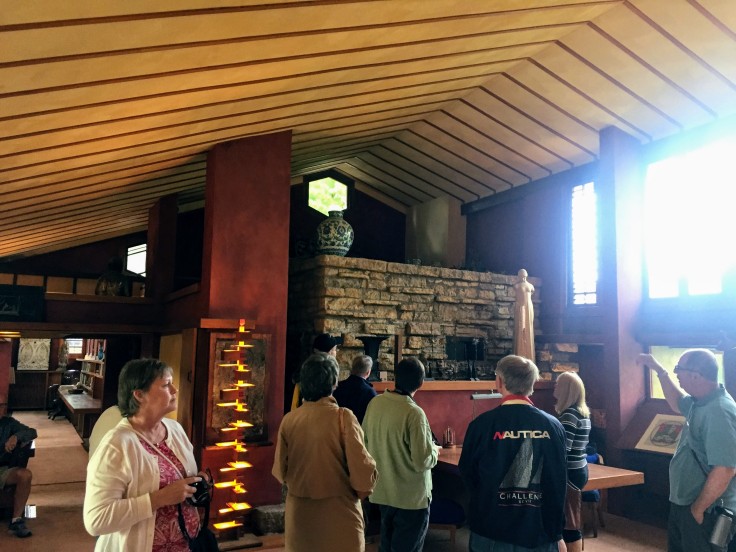 Automobile approach to the house today: 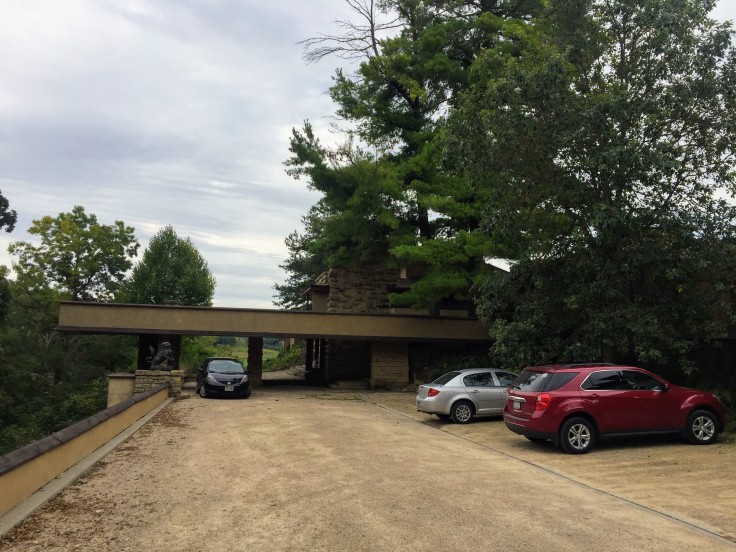 Approach to the hidden front door: 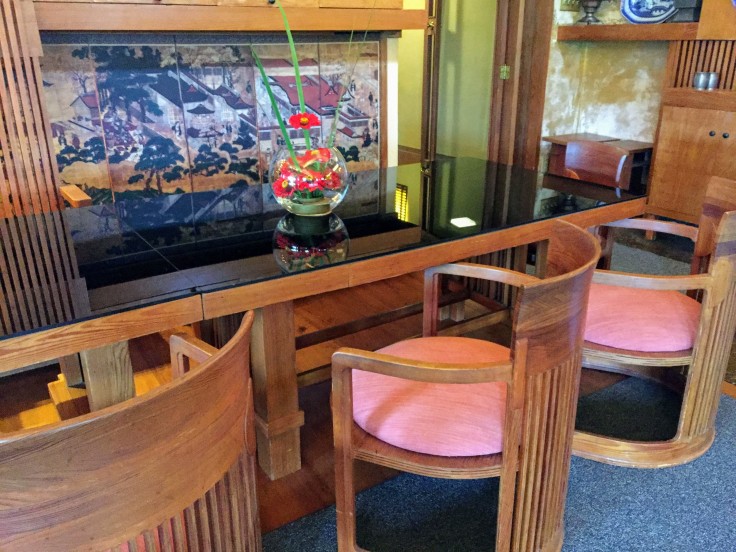 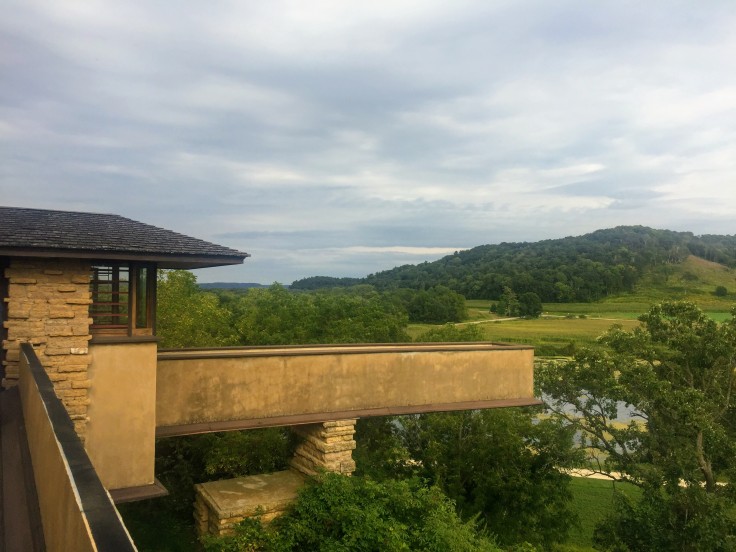 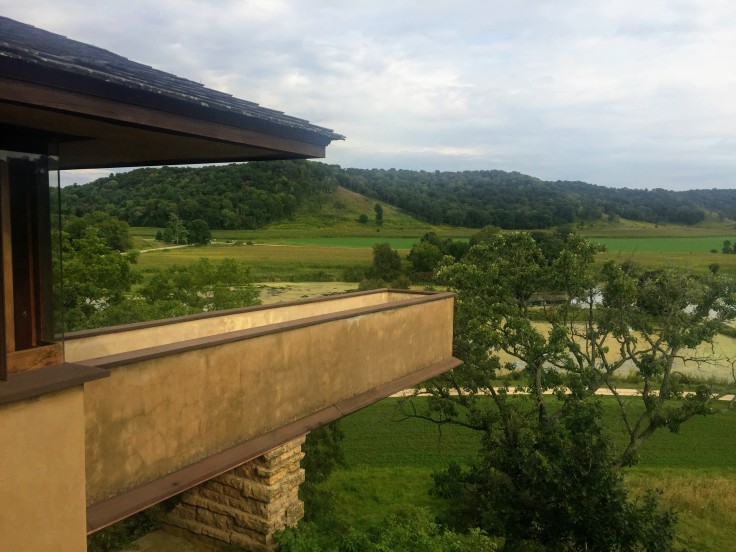 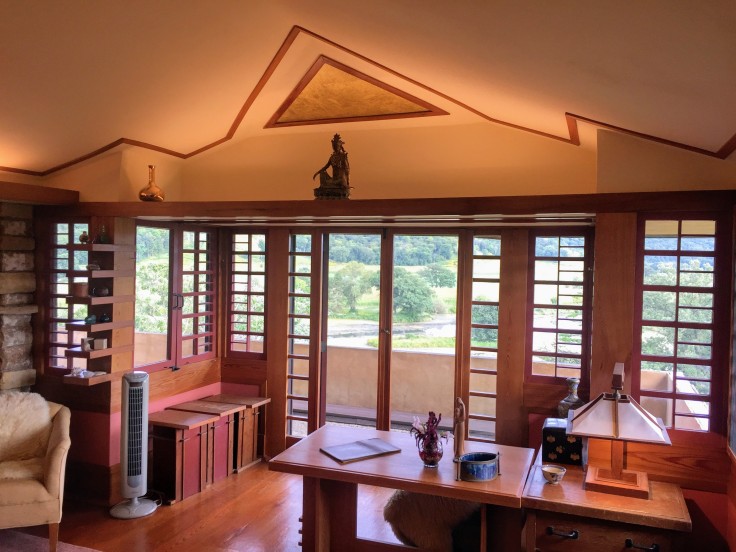 FLW’s bed, in his study; like many creative geniuses, FLK only slept about 4 hours per night and often worked late and arose early and went back to work again:

The waterfall at the approach to the house, below the hill; I was here in March about 10 years ago.  Of course, Taliesin was closed for the winter – everyone goes to Scottsdale to Taliesin West in the winter.  It was about 15 degrees, everything was covered with snow, and the lake and the waterfall were frozen solid.  But, back about 15′ from the edge of the waterfall, there was a guy sitting on a chair, on the ice, fishing…

The property today appears to be in need of major repairs.  However, the design and detailing and thought that FLW put into these rooms and spaces is awe inspiring.  FLW never thought of Taliesin as a permanent structure, but a “sketch” for his ideas.  Keeping the house “pristine” is a monumental task, because it wasn’t built perfectly in the first place.  FLW would get an idea, say, to enclose a covered porch into a sun room, and he would call his students, tell them what he wanted, send a few sketches, and they would build it.  It was not built to museum standards, and will probably always suffer for it.

After the tour we drove to the nearby Lloyd-Jones family chapel and cemetery. The chapel was not designed by FLW, but by his early employer,  Joseph Lyman Silsbee.  FLW was assigned to “supervise” the construction as part of his duties for Silsbee.

There is a gravestone for FLW and his six children from his first marriage, although none of them is buried here… 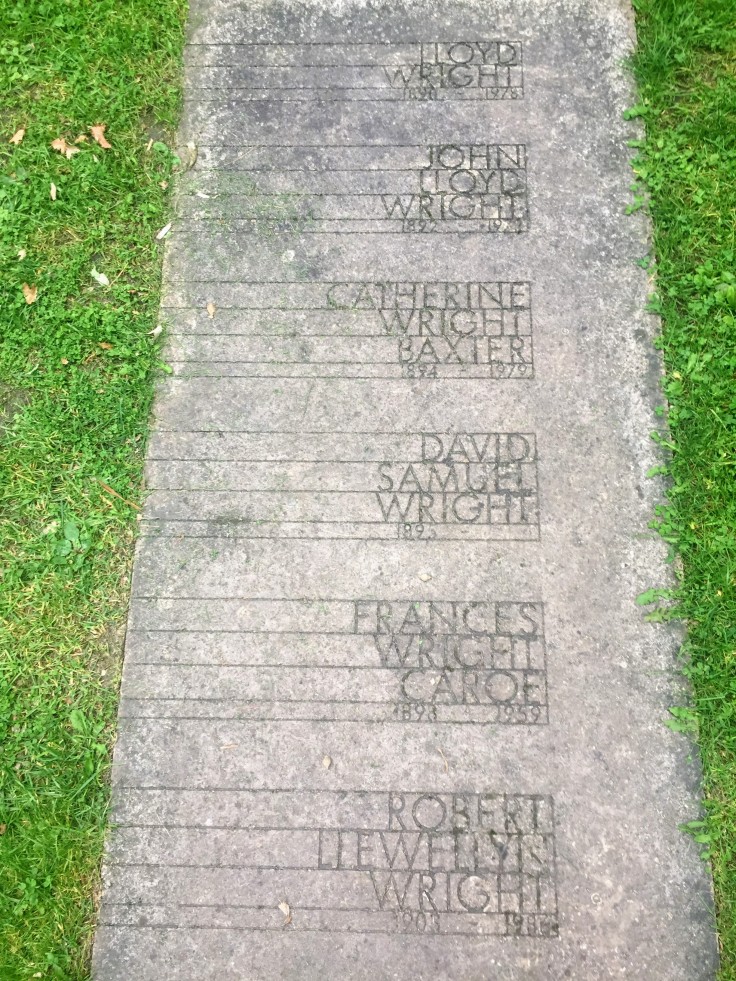 Lloyd Wright, actually Frank Lloyd Wright, Jr. became an architect and was a fine architect in his own “Wright”… (A little architectural humor…)  I met him at his house in 1972 in West Hollywood.  His son, Eric Wright, is also an architect in SoCal; he tends to specialize in historic structures and environmental issues…

David was the recipient of FLW’s design of the X-back chair, seen above…

Catherine was the mother of the actress Anne Baxter…

So after a long day we headed back to the Red Barn Lodge for a short rest, then we went into Spring Green again for dinner at Freddy Valentines.

It’s a good thing we opted NOT to go to The Shed: They have live music in their courtyard on Thursdays… but tonight it rained… 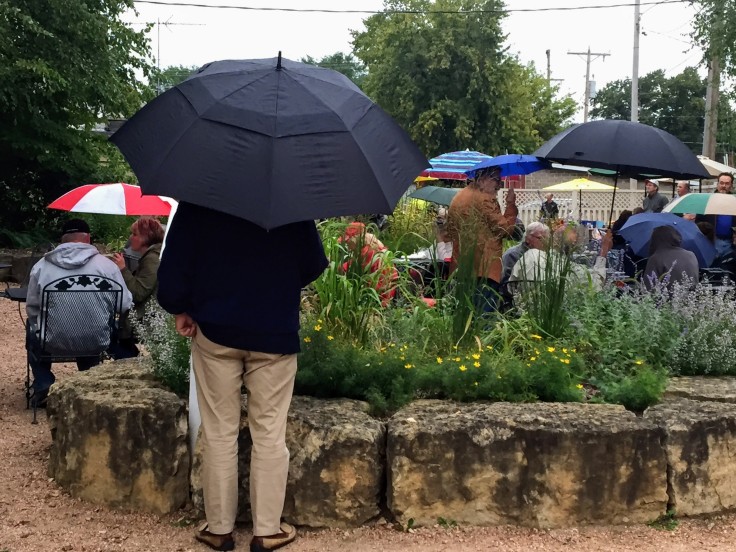 We love to try local foods and wines; we’ve had Maine wine, Nova Scotia wine, Prince Edward Island wine, Niagara Falls wine, and Ontario wine.  But tonight we spotted a California Pinot Noir from the Russian River Valley on the menu.  We were in heaven!

And an enjoyable time was had by all.