What an amazing series of seminars is being offered this week!  In addition to an RV show, and a Marketplace full of RV equipment, gadgets, and services, I have a wonderful opportunity to learn more about this RVing lifestyle!

But first, on my morning walk, I discovered that the fairgrounds has a Bar and Grill! 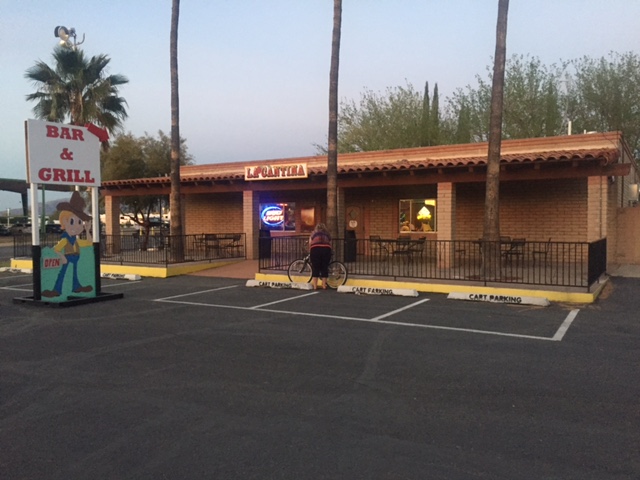 I haven’t tried it yet, but it looks like an interesting place to escape the heat…

On Monday the seminars I attended were:

“Equipping Your RV for Electrical Independence”, where I learned more about electricity and solar panels and batteries in 1 hour then I had in all my previous years.  I now know how attaching two 6 volt batteries in series is better than two 12 volt batteries in parallel.  I learned that an 120 watt solar panel at 12 volts delivers 10 amps per hour, or about 40-60 amps per day, depending on the amount of sunlight.  What I still do not know is why batteries are rated in amp-hours, solar panels are rated in watts, the RV has some things that run on 12 volts and some things on 120 volts, and the “shore” power we plug into the Airstream is 50 amps.  Why we can’t use common terms is still a mystery.  (Presented by RV Solar Electric, Scottsdale, AZ)

“Insurance Shopping – Comparing Apples to Apples”, where I learned that all insurance varies by state – what policy is offered by a carrier in California might not be offered in Arizona.  I learned that policies may pay out for total loss replacement, purchase price, actual cash value, or an agreed-upon value.  I learned that the most important thing that affects the amount of your premium is how many claims you file. Not how much was paid out, whether you were at fault, but just how many claims were filed.  Also, a call to your agent asking about whether you might make a claim is as generally reported as a claim, even if you don’t file a claim.  Best advice: decide what you can afford to pay out of pocket, keep your deductibles at that level, and only make a claim if you actually have to! (Presented by Miller Insurance, Lake Oswego, OR)

“Photo Memories with Google Photos”, where I learned that Google Photos is awesome, and there are some really good, knowledgeable people out there who can teach you how to use it!  I learned that your photos are stored “in the cloud”, for free; that you can clear out photos off your phone to conserve memory space, and that you can easily make albums, share with friends, even print books, all at the touch of a button. These guys are great!  (Presented by Geeks on Tour; geeksontour.com)

“The Intentional Traveler”, where I learned about trip planning, resources available to locate attractions, RV parks, etc. It was all about planning, but also how to change plans if needed. And how to get the most out of your RV travels along the way.  (Presented by Pam Johnson; ntentionaltravelerblog.rvnotepad.com and rvnotepad.com)

And that was just Monday!  The evening brought more “entertainment”. The less said about that the better…

On Tuesday, I signed up to get my truck and trailer weighed, using the SKPs “Smart Weigh” system. I was assigned to gather data from my rig – tire size and DOT date stamp, weights and capacities of all axles, GVWR and GCWR, and other things that had me rolling around on the ground, in the heat, trying to read all these numbers… I weigh the truck on Thursday, and the entire rig on Friday. This will be interesting.

“Technology to Tell Your Story”, where I learned that I should change out of Word Press for this blog, and start using Blogger. This was presented by the same folks who did the Google Photos seminar. Again, lots of great information. There was a third seminar on working with Google Maps, which I could not attend, but I did sign up for their tutorials that are available on-line, mostly on YouTube. I have a lot to learn before we leave on our 4 month journey in June…  (Presented by Geeks on Tour; geeksontour.com)

“Are you smarted than your smart TV?”, where I learned that most problems associated with watching TV inside your RV are due to faulty or incorrect wiring connections and menu selections. Pretty basic stuff, but It was fun listening to questions from the audience about why their 16 year old TVs don’t get any over-the-air stations any longer… (Hint: Old TVs are not digital, and all TV signals today are…)  (Presented by RV Connection, Yuma, AZ; rvconnectionparts.com)

Tuesday evening I did something I’ve never done before:  I joined a bunch of odd old people and we played Bingo!  For $1.00 I was able to play 3 squares for 15 games. The winner of each game won $10.00.  As usual, I won $0.00. But it helped kill the time until it was a bit cooler outside, and in the Airstream…

Wednesday was devoted to 5 seminar sessions all about different aspects of living in your RV full time; no home base, no permanent address.  Some were geared towards younger, working people, who have figured out how to work and earn while on the road; others focused on the emotional issues related to “moving away” from your former house-based life. The last session had a panel discussion with three full-timing couples: a retired couple who have been on the road for just over 10 years, another couple who started full-timing when his doctor said he had less than 8 years to live – that was 25 years ago. The wife kept repeating that she only agreed to do this because it was only for 8 years… The 3rd couple was younger, working, and living and travelling full time for 7 years, with 4 kids, aged 6-14!

All in all, a very productive few days. Wednesday evening it started to cool a bit, and rain is predicted… 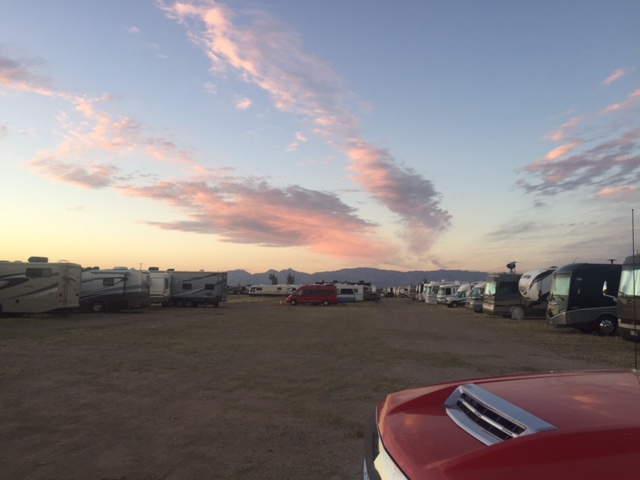 The clouds gave us a nice evening sky…