Before our trip I had read a biography by Ron Chernow: “Titan – The Life of John D. Rockefeller.”  Shortly after, about two months ago, I read “Memoirs“, by David Rockefeller, JDR’s youngest grandson.  The first told the story of how JDR made his money (your opinion may vary…) and built his estate here in the Hudson Valley, and the second told of growing up in his grandfather’s house and eventually turning it into a museum and art gallery for all to enjoy.  Both also contained much information about the life of John D. Rockefeller, Jr (whom I refer to here as Jr.), David’s father. (David died in March, 2017 at the age of 101…)

We set out today to visit Kykuit, home to 4 generations of the Rockefeller family.  It is located a few miles from the Hudson River, east of Sleepy Hollow and Tarrytown, about 25 miles north of New York City.

Kykuit sits amid the vast family estate, known as Pocantico or Pocantico Hills; it occupies an area of  over 3,400 acres. During much of the 20th century, the estate featured a resident workforce of security guards, gardeners and laborers, and had its own farming, cattle and food supplies. It has a nine-hole, reversible golf course, and at one time had seventy-five houses and seventy private roads, most designed by JDR and Jr. A longstanding witticism about the estate quips: ‘It’s what God would have built, if only He had the money’.

(In 1946, the family considered donating a portion of the estate as a home for the newly formed United Nations.  Instead, they bought the 17 acre site in New York City and donated it to the UN…)

When JDR originally bought the estate in the late 1890s, he moved the family into an existing farm house.  He had no need for an elaborate mansion, unlike his wealthy contemporaries like the Vanderbilts, the Astors, or J. P. Morgan.  What he did want, and soon built, was a carriage house and stables for his prized horses, and a golf course for his personal use.

After the original house burned down, JDR wanted to move into another existing modest dwelling on the estate.  Instead, Jr. convinced him that he needed a grand house more befitting his status as the wealthiest man in America.  JDR finally agreed.  A new house was promptly built; it was found to be inadequate and faulty in both design and construction, and a new house was rebuilt in its place.  It was completed in 1913. It has four stories and two basements; however…

Unlike the monumental size and the display of vast wealth seen in other museum-like Gilded Age mansions, Kykuit’s cozy rooms are a reflection of the conservative and family-oriented lifestyle of the Rockefeller family.  The devout John D. Rockefeller’s puritan values dictated that there be no ballroom, no card room, no billiard room, and no place for drinking or other activities deemed to be inappropriate.  The house had only 40 rooms – very modest by the gilded age standards of the day… There are 11 family and guest bedrooms.

In fact, JDR and Jr. spent more money on the grounds then they did on the house; the last resident, Nelson, used the estate as a giant art gallery, displaying his huge collection of modern art.  To preserve the view, JDR moved an entire village, including the train station and miles of tracks, a few thousand yards further away. To keep down the noise of constant service deliveries he built tunnels so that all deliveries and service access to the house were underground.  Jr. and his wife built a “Playhouse” to keep their 6 children occupied.  It is larger than the main house, and includes indoor and outdoor tennis courts, indoor and outdoor swimming pools, a bowling alley, billiards, a soda fountain, a theater, and assorted other amenities.  About 86 acres were enclosed into the “Park”, which contained the main house, the Playhouse, a reversible 9 hole golf course, plus many other houses for various other family members over the years. All the rest of the land has always been left open for the public to use. It was all donated to the National Trust in the 1980s, and the house and some of the “Park” is now also open to the public.  (Some portions of the estate are still private, because family members still live in some of the houses…) The majority of the original 3,400 acres are now a New York State Park.

At the time of the donation, except for family events, the 11-bedroom house had been unoccupied since Nelson Rockefeller, a grandson of JDR, died in 1979. The National Trust acquired a quarter interest in the 600-acre Rockefeller property in Pocantico Hills in 1979 under his will. In 1983, the Rockefeller Brothers Fund and the National Trust determined the boundaries of the new 86-acre Pocantico Historic Area, which includes the property and Nelson Rockefeller’s art collections at Kykuit.

Throughout the house, priceless East Asian pottery that the family avidly collected and cherished anchors each room. The main floors and basement (the latter was turned into a vast art gallery) boast modern art by the likes of Pablo Picasso, Alexander Calder, Andy Warhol and Henry Moore collected by modern art enthusiast Abby A. Rockefeller Jr.’s wife) and Nelson Rockefeller

Again, interior photographs are not allowed on the tour. The house has only two rooms that visitors would ever see – the office and a small parlor. There is no grand staircase, no Ballroom, no Grand Hall. This house was not designed for ostentation and the display of wealth.  Most of the house was reserved for the family.  Life for the family revolved around a “family” room in the center of the house, which contained a massive pipe organ (removed by Nelson). There is a large dining room for family meals, and a quieter sitting room. The terrace to the west boasts a view over the treetops to the Hudson River. No other buildings are visible between the house and the river.

Our tour started in the town of Sleepy Hollow at the Visitor Center. We took a shuttle up to the Park, where we drove along the original carriage roads, then up to the entrance court of Kykuit.  The front of the house is relatively narrow, but the view to the East is fabulous. 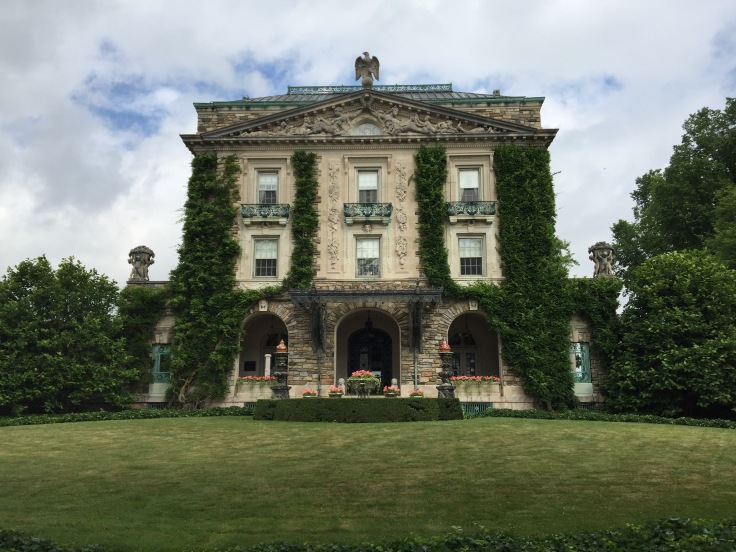 Side facing the lawns and gardens: 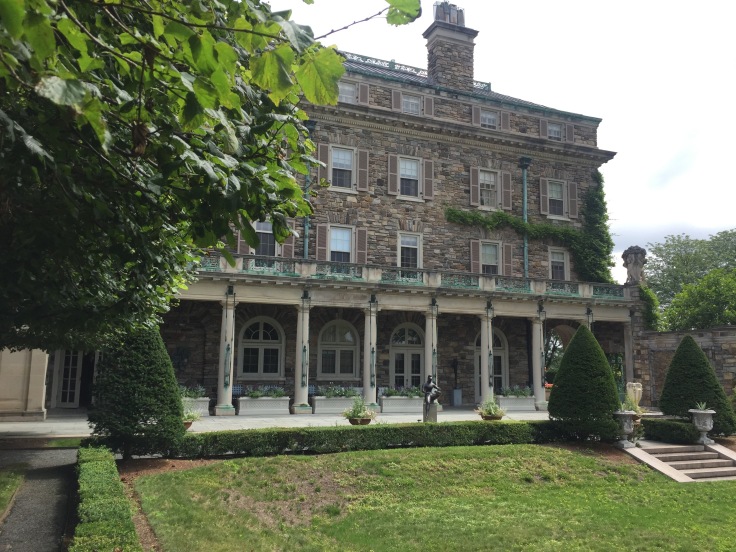 West views towards the Hudson: 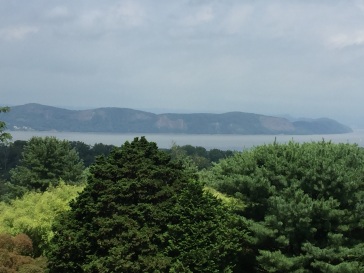 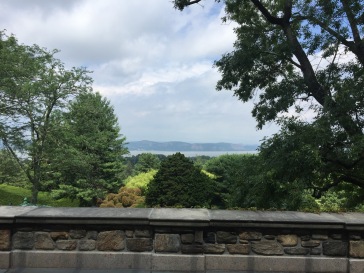 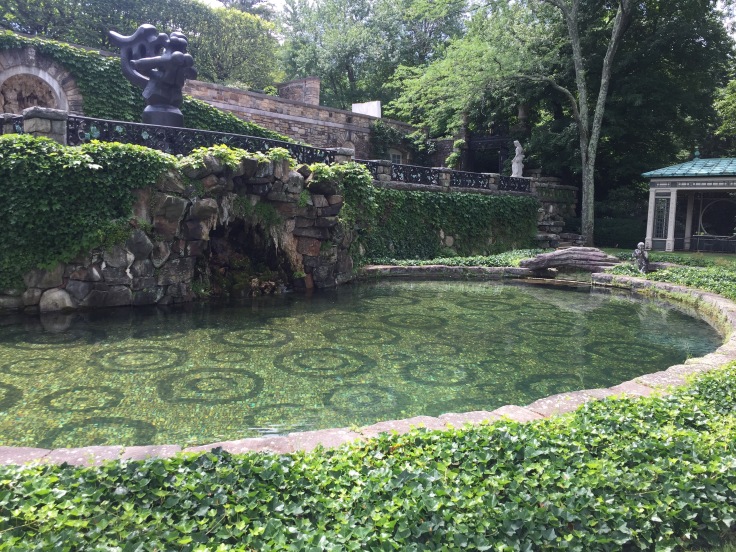 The Teahouse; Nelson had swimming pools built where the sunken lawns were (and are), and he converted the Teahouse into a soda fountain… 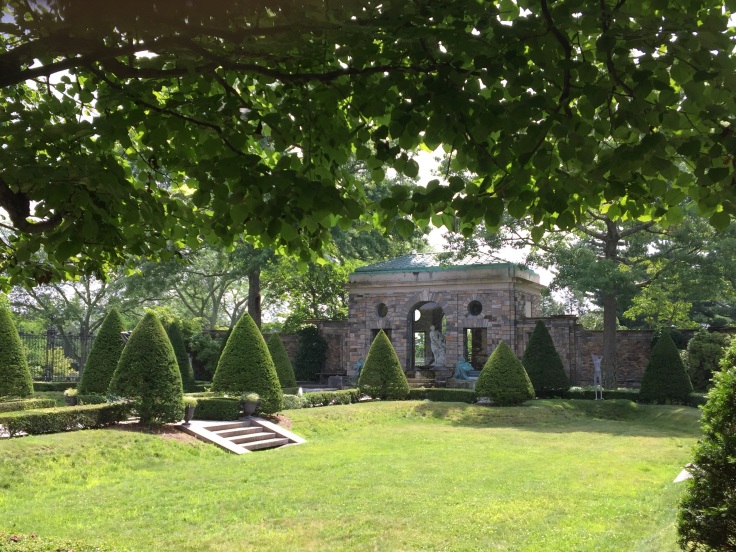 While there are obviously many differences between Kykuit and other neo-classic great houses of this era, there is one striking thing that we noted:  These houses were all built about the same time as the Martin House, which we saw in Buffalo. (See my June 28 2017 blog post…)  As these piles of excess were being assembled, Frank Lloyd Wright was rethinking the whole idea of what a house is, and what 20th century architecture is. 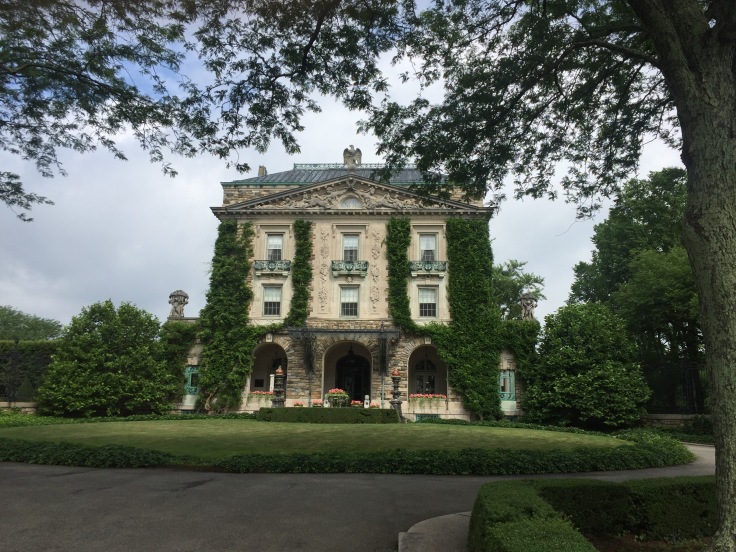 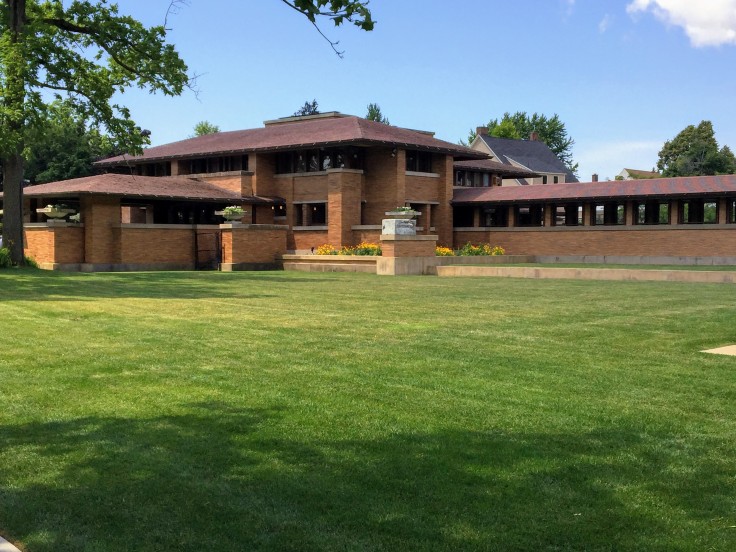 As I said above, JDR loved horses and carriage racing. His first act upon buying the estate property was to build a Carriage House.  Today it contains historic carriages and cars owned by the family.  The basement and upper stories have been converted to a conference center for the use of the family’s business and charitable interests. 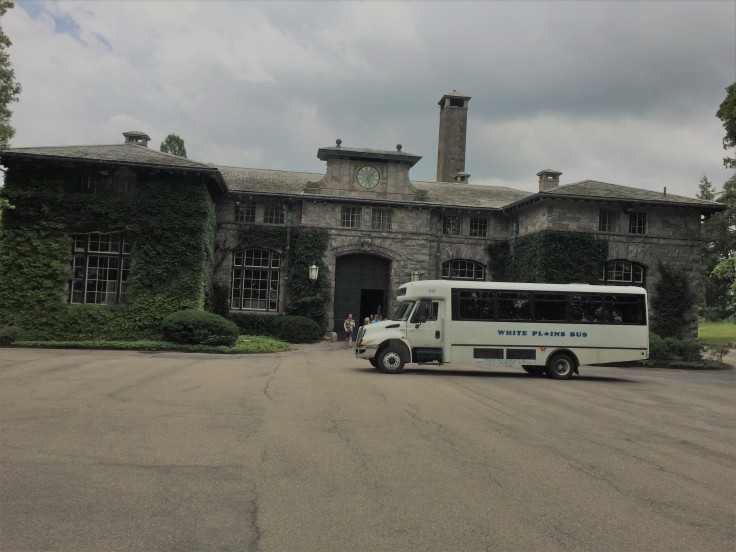 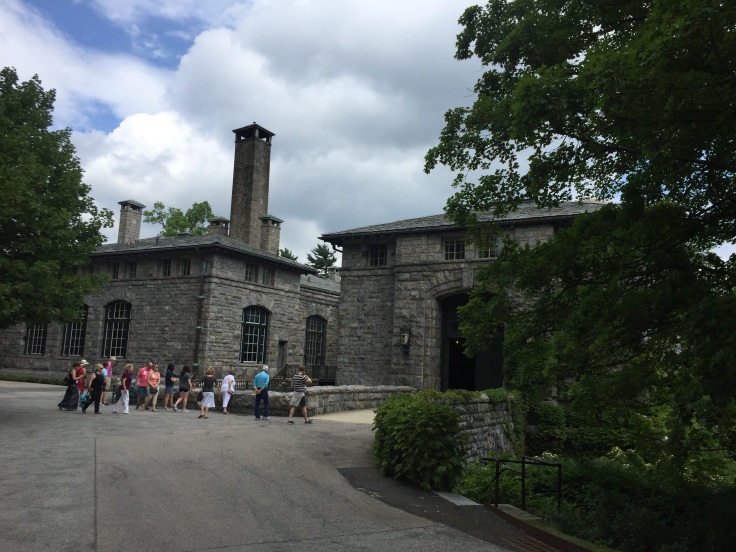 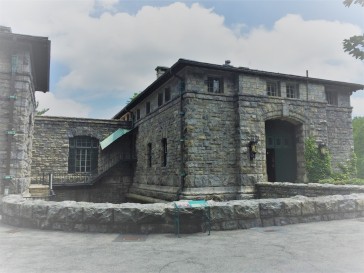 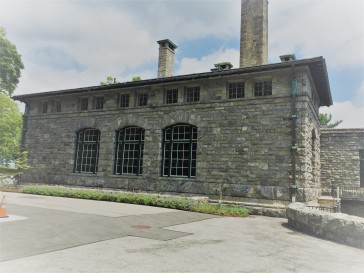 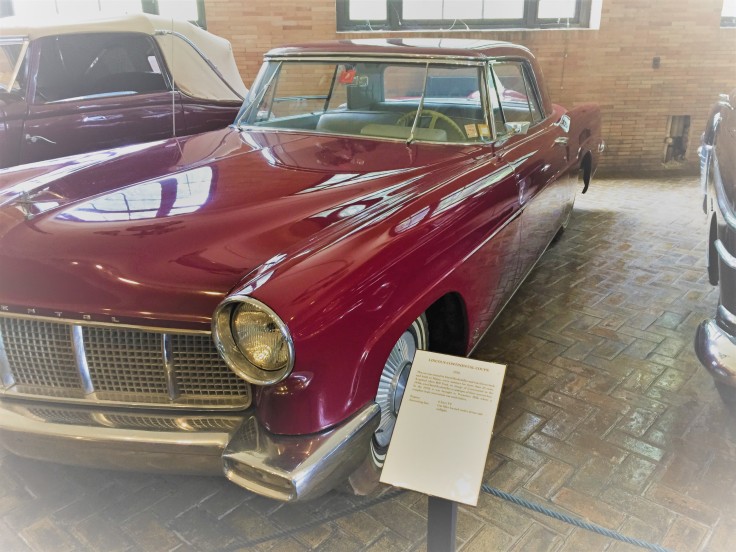 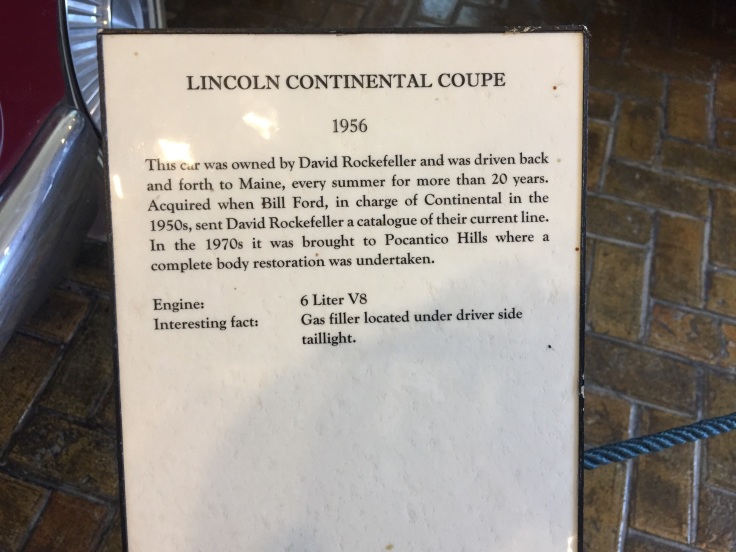 This is David Rockefeller’s Continental.  The joke here is that, as any Continental lover knows, this car is NOT a Lincoln; Continental was a separate division of Ford when this car was built…

After the tour we were shuttled back to Sleepy Hollow; we grabbed a quick lunch in a local pub, then drove to The Union Church of Pocantico Hills.  This tiny country church has a stained glass rose window by Henri Matisse, and 9 stained glass windows by Marc Chagall… After all, when some of your parishioners are the Rockefeller family, things get done.

The church was built by John D. Rockefeller, Jr. in 1921, as part of his plans to develop the town of Pocantico Hills, which was below his estate Kykuit.   It is a one story neo-Gothic style building with fieldstone foundation and walls and a slate covered, highly pitched gable roof. In 1930-1931, a parish hall was added to the east end of the church.

David Rockefeller, members of the Rockefeller family, and members of the church commissioned organ-builder Sebastian M. Glück to design and build the Laurance Spelman Rockefeller Memorial Pipe Organ in 2006.  It is used for public recitals as well as for church services. 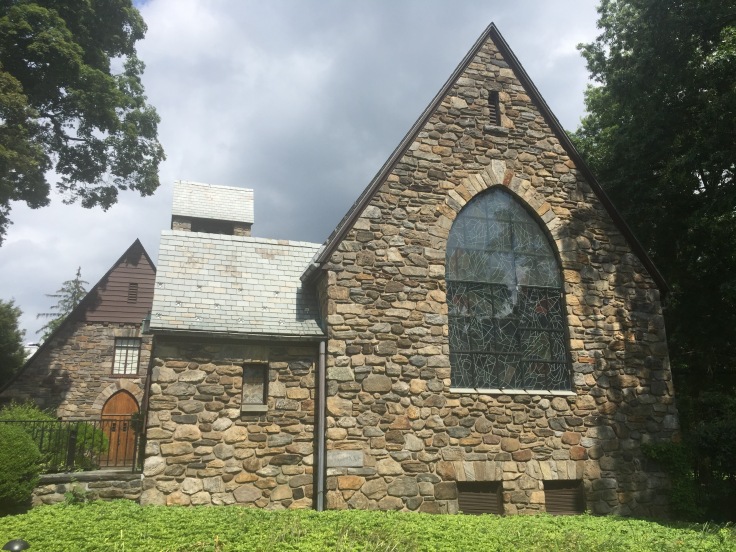 We returned to the Villa and had a quiet evening in the Villa.  At least we were quiet. The weather was not.  We were treated to a huge thunderstorm that raged for what seemed like hours.  Thunder and lightning and heavy rain, things all so unfamiliar to us…  We were parked under a large tree, and, being unaccustomed to lightning, we were not sure whether this is a good thing or a bad thing… However, all ended well and we survived…