What is a Fortress? How is it different from a Fort?

A Fortress is a fortified town.  A Fort is a military-only defensive structure.  A Fortress contains both the military and civilians. All the essential operations are of a town – the butcher, the baker, and the candlestick maker – are within the fortress, as well as government and military operations.

The Fortress of Louisbourg was a French fortress on Cape Breton Island, Nova Scotia.  Its two sieges, especially that of 1758, were turning points in the Anglo-French struggle for what eventually became Canada.

The original settlement was made in 1713, and initially called Havre à l’Anglois. Subsequently, the fishing port grew to become a major commercial port and a strongly defended fortress.  The fortifications eventually surrounded the town.  The walls were constructed mainly between 1720 and 1740.  By the mid-1740s, Louisbourg was one of the most extensive (and expensive) European fortifications constructed in North America.  The Fortress of Louisbourg suffered key weaknesses, since it was erected on low-lying ground commanded by nearby hills and its design was directed mainly toward sea-based assaults, leaving the land-facing defenses relatively weak.  A third weakness was that it was a long way from France or Quebec, from which reinforcements might be sent.

Louisbourg was captured by British colonists in 1745, and was a major bargaining chip in the negotiations leading to the 1748 treaty ending the War of the Austrian Succession. It was returned to the French in exchange for border towns in what is today Belgium.  It was captured again in 1758 by British forces in the French and Indian War, after which its fortifications were systematically destroyed by British engineers.  The British continued to have a garrison at Louisbourg until 1768, when it was again returned to the French.

The fortress and town were partially reconstructed in the 1960s and 1970s, using some of the original stonework, which provided jobs for unemployed coal miners.  The site is operated by Parks Canada as a living history museum, much like Williamsburg, VA and the Plimoth Colony in Plymouth, MA.

We were able to walk from the RV park to the Visitors Center, whereupon we were bused over to the Fortress.  We entered through the original gates, where we were met by a “guard” who demanded to know our business here.  We wandered the town, hearing some of the history from our guide. They have a bakery operating in the old bakery building, making fresh bread daily using centuries-old recipes and methods. They also have a few restaurants, serving food of the era… we passed on the opportunity to eat centuries-old food… 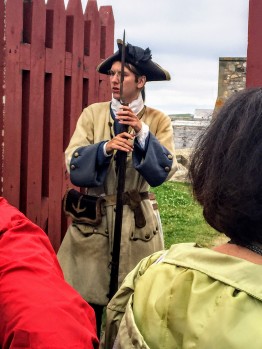 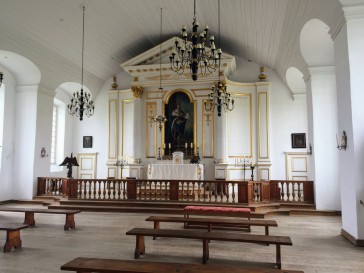 That evening, we were introduced to another fascinating feature of the modern day town of Louisbourg: we learned about what they call “The Beggars’ Banquet”.  We were told nothing about this event, other than we had to pre-select our entree for the dinner – lobster or steak.  This didn’t sound like what beggars normally ate, but we went along with it.  Also, we were told that we would have to dress in period costume, something that always freaks me out…

We arrived at the location of the Beggars Banquet about 30 minutes early, and we were not the first ones there.  This proclivity of being chronically early for all events is an Airstream Club tradition (and curse…).  We were immediately re-dressed in what we assume are “beggars clothes”.  Luckily for me, this consisted of an oversized shirt and a 3-corner hat.  We then were shown to our dining room and invited to buy drinks at the bar.  So far, so good. 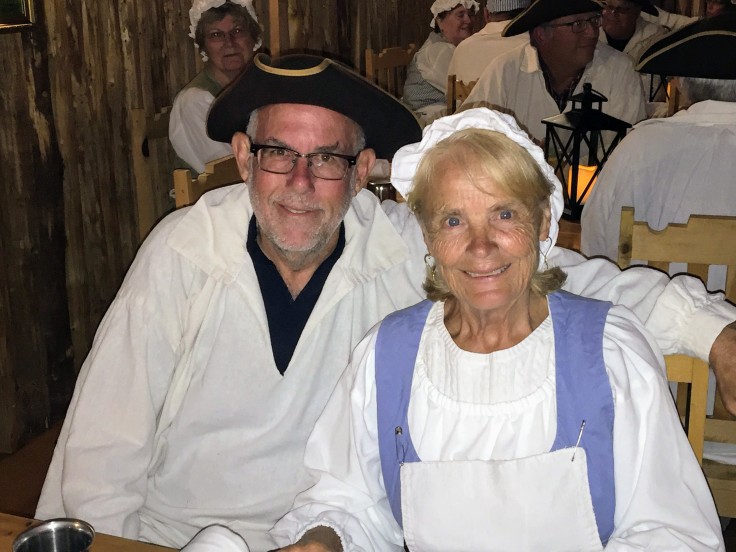 The dinner was quite good, considering the buffet banquet-style operation. There was musical entertainment all through the evening.  One of our members even helped-out at one point in time:

Other members of our group: 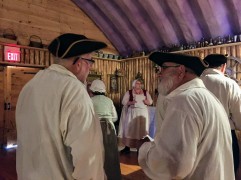 The “fun” began about halfway through the evening: A bizarre-looking caricature of a women joined the group and set about selecting men from our group to dance with.  I almost ran screaming running from the room… I vowed to do just that if she approached me… Luckily, she did not…  I must have looked as scary to her as she looked to me…!  (We later found out that she actually is the owner of the place, and this is just her shtick for the evening…)

We again walked back to the Villa.  An enjoyable time was had by all…